A security researcher who goes by the name “RyeLv” recently discovered an elevation of privilege vulnerability in Windows. Microsoft has publicly disclosed the vulnerability and registered it in the Common Vulnerabilities and Exposures (CVE) system with the name CVE-2022-21882. The National Institute of Standards and Technology (NIST) has given the vulnerability a high severity rating of 7.8.

The vulnerability functions as a bypass for CVE-2021-1732, a vulnerability found in December of 2020 to have been actively exploited since May of that year. Microsoft patched this prior elevation of privilege vulnerability in 2021, but this new one gets around the old patch, requiring a new patch.

Patching this update is particularly critical for Windows Server admins who may have decided to skip January’s 2022 Patch Tuesday update or even rolled back to the previous version after initially installing the update on account of some significant bugs that initially accompanied it. As we reported earlier this month, the update shipped with bugs that were causing Windows domain controllers to boot loop, blocking Hyper-V initialization, disabling ReFS support, and breaking certain types of IPSEC connections. Fortunately, Microsoft has issued updates for these bugs, so Windows Server admins should install January’s update in order to receive the patch for this latest elevation of privilege vulnerability. 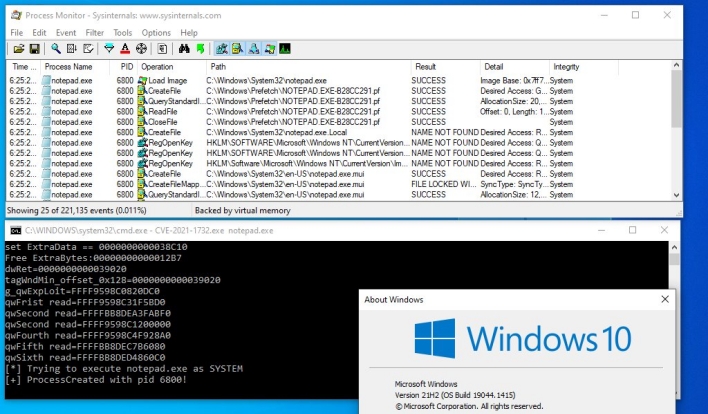 Shortly after the vulnerability went public, multiple exploits for it were publicly released and confirmed to work. The exploits enable attackers with limited access to Windows devices to elevate their privileges, create new administrative users, and perform privileged commands.

You can read more about the vulnerability on Microsoft’s public notice of disclosure or RyeLy’s breakdown.