Want To Install Windows 11 On An Unsupported PC? Accept This Microsoft Waiver First

Microsoft can't seem to release a new version of Windows without causing controversy. Windows 8.x was panned for its graphical redesign, while Windows 10 was blasted for Microsoft's constant nagging to "encourage" users to upgrade. With Windows 11, the company has taken flak for its hardware requirements, including the need for TPM 2.0 and Ryzen 2000/8th generation Core processors and newer.

Microsoft recently indicated that it would allow customers with unsupported hardware to perform a clean install of Windows 11 but that they could be prevented from accessing Windows Update (and general security updates). Those restrictions are likely enough to scare most people away from taking the risk. 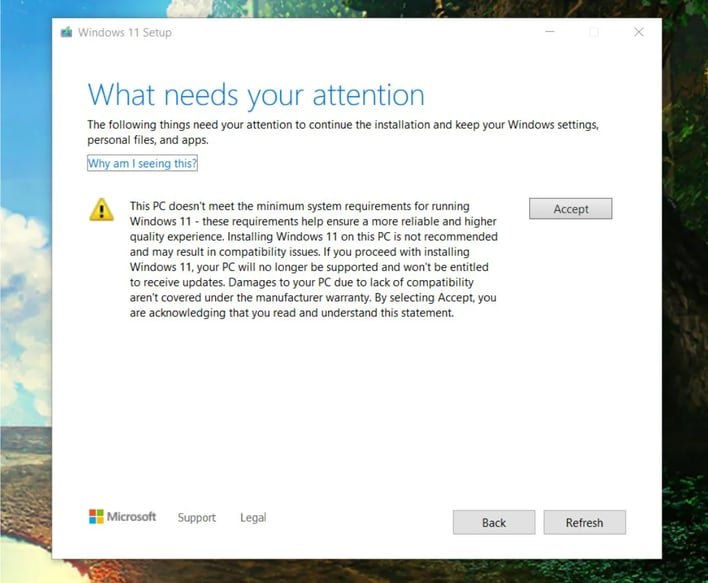 Now, the software giant is coming right out with a message to warn upgraders that not only is their current configuration not supported, but that it could end up voiding your warranty. This waiver presents itself during the setup process for the upgrade to the Windows 11 beta, according to The Verge. The message reads:

If you proceed with installing Windows 11, your PC will no longer be supported and won't be entitled to receive updates. Damages to your PC due to lack of compatibility aren't covered under the manufacturer warranty. By accepting Accept, you are acknowledging that you read and understand this statement.

In other words, Microsoft really doesn't want you to go through with the upgrade if your system can't cut it with the minimum systems requirements. So even though cutting off Ryzen 1000 processors and most 7th generation Intel Core processors might seem a little suspect on Microsoft's part, it's well within the company's rights to draw a line in the sand. And with those restrictions in place – not to mention this waiver – it seems like a bad idea to try to go forward with the Windows 11 upgrade, given the unfortunate consequences.

Sure, it's nice to have the latest shiny operating system installed on your PC, but is Windows 11 worth all the potential trouble? And we can't forget that Windows 10 will be supported through 2025, and it is still a good [and mature] operating system.