Windows 11 Is Coming, So What New Features Would You Like To See Microsoft Deliver?

From the beginning, we were told Windows 10 would be the last monolithic release of Microsoft's popular operating system, with monthly security patches and bi-annual feature updates shoveled into it on an ongoing basis. For all intents and purposes, Windows 10 was to be an endless road. Except maybe not. Microsoft has teased that a Windows 11 could be on the horizon, which raises the question, what should it entail?
We have to wait two and a half weeks to find out for sure. Microsoft is scheduled to reveal "what's next" for Windows on June 24 at 11:00 am ET (2:00 pm PT). The company announced the event on Twitter through its @Windows account, with a short 6-second animation teasing a refreshed look (see the screenshot above).
Whether it truly ends up being a Windows 11 release, a new version of Windows called something else (maybe just Windows?), or a dramatic overhaul to Windows 10, some big changes are headed our way.
"Soon we will share one of the most significant updates to Windows of the past decade to unlock greater economic opportunity for developers and creators. I have been self-hosting it over the past several months and I'm incredibly excited about the next generation of Windows," Microsoft CEO Satya Nadella said recently.

"Our promise to you is this: we will create more opportunity for every Windows developer today and welcome every creator who is looking for the most innovative, new, open platform to build, distribute, and monetize applications. We look forward to sharing more very soon," Nadella added.
At the very least, we expect to see an infusion of Sun Valley, the codename for a project referenced in internal documentation as "reinvigorating and modernizing the Windows desktop experience." In all likelihood, this will see more Material Design elements, like refreshed icons and other visual changes.
There's a thread on Reddit that is littered with Windows 11 predictions of what the the reveal might entail, some of them snarky (like the return of a Windows 8 style Metro UI) and others more serious, with some interesting suggestions. For example, Explorer tabs would be a welcome feature, and one that is long overdue.
Other predictions and wish list items include a consistent dark mode in File Manager, a revamped Task View, a new Microsoft Store, native Linux support, and under the hood optimizations that are intended to leverage hybrid chip architectures, like the one Intel's Alder Lake will introduce later this year, and that AMD's Zen 5 is rumored to feature. 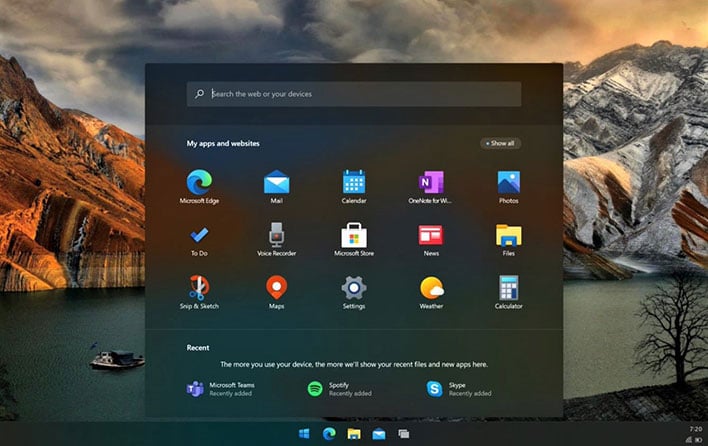 It's also worth noting that Microsoft cancelled its Windows 10X project, which was supposed to launch as a standalone OS, and said some of those elements will be injected into Windows 10.
"Our teams continue to invest in areas where the 10X technology will help meet our customer needs as well as evaluate technology experiences both in software and hardware that will be useful to our customers in the future," Microsoft's John Cable said at the time. "This shift in thinking is an incredible example of the company's value of a growth mindset at work and exemplifies our customer-first focus."
That means the upcoming reveal could include a centered taskbar and perhaps some optional elements that are geared towards dual-screen devices, as Windows 10X was originally designed for.
This is where we hand the mic to you and ask, what exactly would you like to see in Windows 11, or whatever Microsoft announces later this month? Sound off in the comments section below!