The big news from Microsoft is that it is getting ready to introduce the "next generation of Windows," which will almost definitely be called Windows 11—it's put out several hints indicating as much, including an 11-minute droning video of slowed down Windows startup sounds from over the years. Another clue is a leaked Windows 11 ISO making the rounds, and one of the things it reveals is a new way to wake up your PC.
There are already a few ways to wake up a Windows PC, like pressing the power button or, depending on how you have things configured, mashing a key on your keyboard or clicking a mouse button. We now find ourselves in the era of touchscreen devices, however, and so it looks like Windows 11 will introduce a "Wake on Touch" feature. 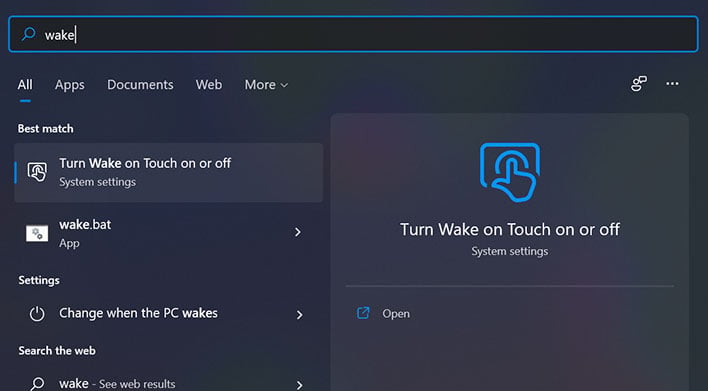 The nifty new feature popped up on Twitter, prompting us to check it out for ourselves. We can verify that it is a hidden option on the leaked build that is making the rounds.  It is accessible by typing "Wake on Touch" in the search menu, which brings up a setting to "Turn Wake on Touch on or off," though the toggle is not visible in Settings—you have to specifically search for it, and even when clicking the feature, it just takes you to the Settings app where the actual toggle is nowhere to be found.

Even when searching for it, the option might not show up, depending on your configuration. We have been knocking around the leaked build ourselves on a couple of machines (check out our Windows 11 performance preview), and could not get the setting to show up on a PC that does not have a touchscreen. On the one that does have a touchscreen, however, searching for the toggle returned the result you see in the screenshot above. 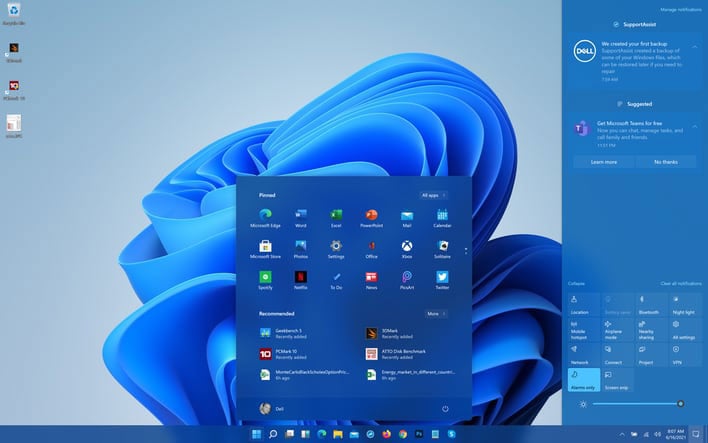 This is not a brand new idea, by the way. Handsets like the Lumia 950 and other Windows Phone devices from a century ago (not quite, but it feels that long) had an option to turn on "Double Tap to Wake up Screen," which is exactly what it sounds like—when enabled, you could double tap the display to wake the handset up.
While hidden for the time being, it is entirely possible that Microsoft will fully enable the feature when Windows 11 ships later this year. The leaked build, after all, is an early release, and the final build that emerges in October could look, function, and perform very differently in some areas, this being one of them.
We will know more about Windows 11 sooner than October, however, as Microsoft is planning a reveal event for next Thursday, June 24. Stay tuned.