Windows 11 is out, and part of the tuning that went into the OS was for it to do a better job utilizing hybrid architectures, like the one Intel is about to release with Alder Lake, and which AMD might eventually follow suit (don't rule out a hybrid future for Zen). Will it really make all that much of a difference, though? A leaked benchmark run using SiSoftware's SANDRA utility suggests it could be. At the same time, this is one of the few benchmarks leaks we've seen that puts Ryzen in front of Alder Lake, OS be damned.

Benchmarks leaks can be polarizing for sure—just dip into the comments section in our article on some recent Userbenchmark numbers for a Core i9-12900K. Userbenchmark has a history of favoring Intel hardware, as we pointed out, and of course just about any benchmark leak should be viewed with at least some amount of skepticism.
This time around, the Core i9-12900K is again in the limelight, with two stories to tell. The first is how a move from Windows 10 to Windows 11 can impact performance. Here's the listing in question... 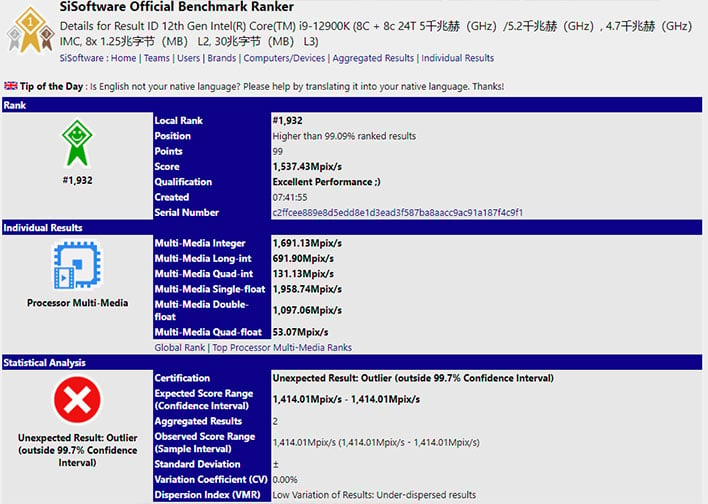 The recent SANDRA benchmark entry accurately identifies the Core i9-12900K as wielding eight high-performance cores (Golden Cove) and eight power-efficient cores (Gracemont), the former of which support Hyper Threading. That makes Intel's upcoming flagship CPU a 16-core/24-thread chip. It also features 30MB of L3 cache.
This listing alone does not tell us a whole lot. However, a big hat tip goes out to leaker @TUM_APISAK, who dug up and graphed a bunch of benchmark scores for some interesting comparison data. 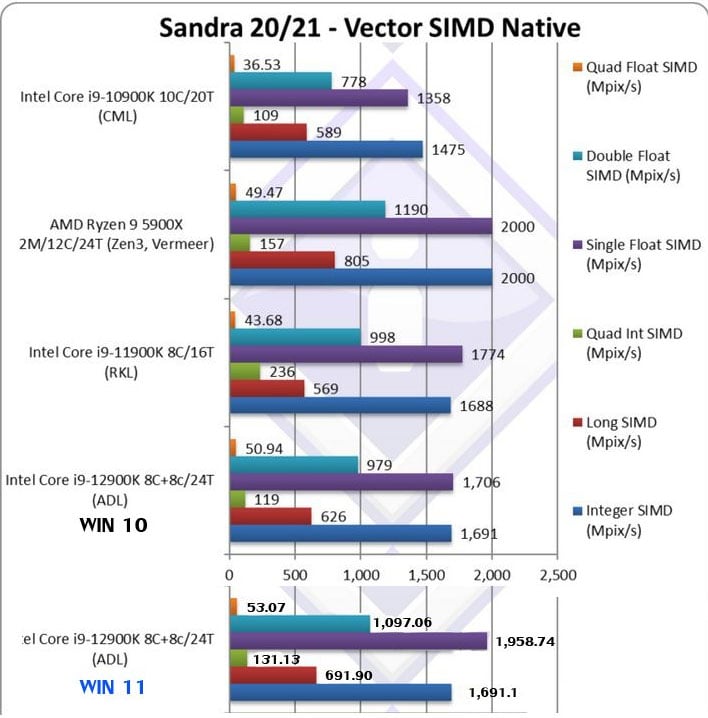 Let's start with the OS comparison. Looking at the scores obtained from the Core i9-12900K in Windows 11 versus Windows 10, we see the newer OS improve performance by as much as 14.77 percent, depending on the benchmark. Here's how it breaks down...
This is not surprising to us. We performed our own preliminary testing earlier this year, albeit with a preview build of Windows 11 and a Lakefield system. Lakefield is also a hybrid architecture, combining Ice Lake (big) and Tremont (small) cores, though Alder Lake is a much bigger effort. Even so, our tests showed a performance advantage when running the same setup in Windows 11 versus Windows 10.

Several of the leaked benchmarks we've seen so far indicate that Alder Lake will give even AMD's top Zen 3 CPU (Ryzen 9 5950X) a run for its money, depending on the workload. SANDRA tells a different story. Looking at the same graph above, here is how the Core i9-12900K compares to AMD's second-best Zen 3 chip, the Ryzen 9 5900X...
These are clear victories by Zen 3 over Alder Lake, half of which come by double-digit percentage gains. The biggest win is by nearly 20 percent (Quad Integer).
By the way, the Ryzen 9 5900X is a 12-core/24-thread CPU with a 3.7GHz base clock, 4.8GHz max boost clock, and 64MB of L3 cache. It is roughly comparable to the Core i9-12900K in core and thread counts, though obviously they are two very different architectures.
This is an interesting comparison for sure. Like every other leak, we'll have to wait for Alder Lake to arrive before knowing if these results stand up to post-launch testing by reviewers and the general public at large. Fun times are ahead.