Windows 10, version 2004, or the Windows 10 May 2020 update, has been plagued with a variety of issues, including corrupted files in Storage Spaces. Microsoft has finally released a workaround for Storage Spaces that should help users that have already updated to Windows 10 version 2004.

The main purpose of Storage Spaces is to protect a user from drive failures by saving to files to multiple drives. Unfortunately, several users reported that their files in the Storage Spaces “parity spaces” had been corrupted after updating to Windows 10 version 2004. For example, one user noted, “My 20TB parity storage space shows up now as RAW, no accessible files. Storage Spaces tool and PowerShell show it as healthy, containing data.” Another user remarked that they had noticed that the photos they keep within their parity storage space had been corrupted. 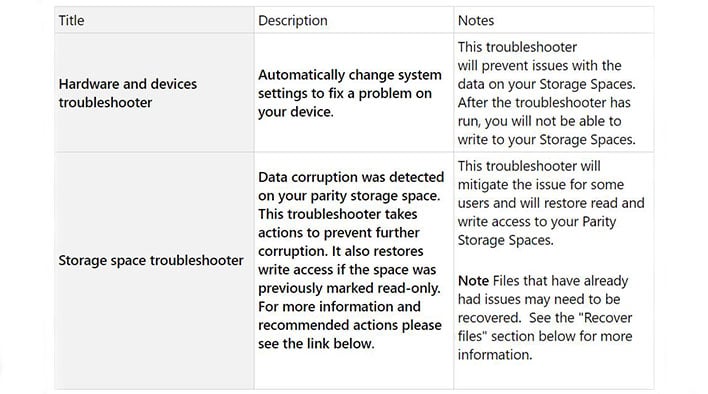 The troubleshooters have been released to a handful of Windows 10 version 2004 devices. Microsoft has also provided IT professionals with a guide to manually administer the hardware and devices troubleshooter. They do not currently have comparable instructions for the Storage space troubleshooter.

You can check that the troubleshooter has been run by going to your “Start menu” and typing in and selecting “Troubleshoot settings.” You will then need to click on “View troubleshooting history.” You should see the above titles and descriptions of the troubleshooters.

You will not be able to update to Windows 10 version 2004 if you do use Parity Storage Spaces. You will receive the message that your device is not yet supported. Microsoft states that there is nothing further you will need to do except wait for them to fix the problem.

Windows 10 version 2004 has been particularly frustrating for users. They have released a few fixes and workarounds, but there are still a bevy of unresolved issues. To top it off, Microsoft has now decreased the amount of time that Enterprise and Education customers have to defer the update. Windows 10 end users can now only defer the update for 35 days.