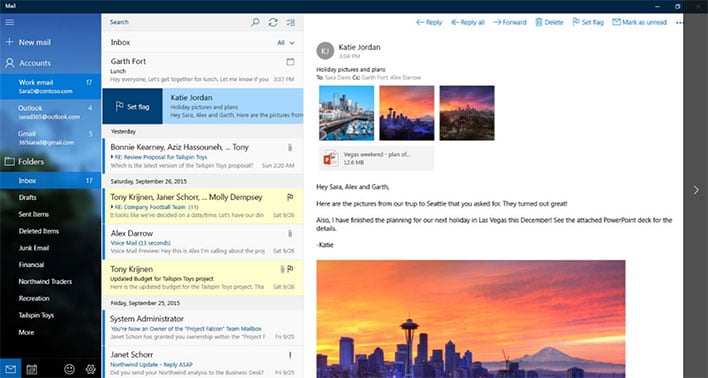 In the rush to plug up security holes and introduce new features, it is not uncommon for Microsoft's updates to inadvertently break things. We have covered numerous instances of this over the past several weeks. Here is one more you can add to the pile—there is an apparent bug in Microsoft's Mail and Calendar app that is wreaking havoc on Gmail accounts.
The Mail and Calendar app is a Universal Windows Program (UWP) app available in the Microsoft Store. It has mostly positive reviews, with a 4.4 star rating out of 5 stars from 2,059 people who have taken the time to vote. But like any program, it is not without the occasional issue, and this latest one is creating headaches for some people.
"I have been facing an issue with the Windows 10 Mail app linked to a Google account. I have noticed that when I respond to emails, the email I send disappears and cannot be found in sent items, outbox, bin, spam, or anywhere actually. The disappeared email cannot be found on Gmail's web interface either. It appears that it is automatically deleted and erased from the server," one of the complaints states.
This is not an isolated incident. It seems that an update towards the end of May introduced a bug that is causing the app to delete sent emails on Gmail accounts, or plop them in the spam folder instead of actually sending them out to the intended recipient.

According to an MVP on the Microsoft Answers forums named Phil, the latest version of the app has "broken the settings for Gmail."
"The best way to work around this is to remove the Gmail account from the Mail app and then re-add it manually via the Other Account POP/IMAP route using the IMAP settings as described in Gmail help," Phil explains.
Phil also notes that users many need to change a security setting in Google to allow access to less secure apps, as Google has classified the Mail and Calendar app as being less security "and therefore blocks it from doing some tasks."
Another user identified another potential workaround that involves creating a filter via the following steps...
It's not clear if this is an issue Microsoft and Google will resolve, and if so, when that might happen. In the meantime, you can try either of the above if this is affecting you.