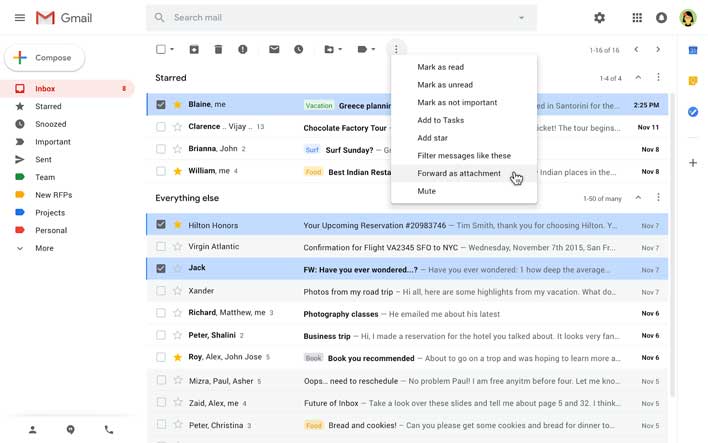 Google has announced a change for Gmail that will allow users to send emails as attachments. The update enables users to drag and drop the email they want to attach to their new message.

Another way to attach an email to a new email thread is to select the emails with the check boxes on the left of messages and then click the three dots at the top of the screen and choose "Forward as attachment." Replying to an existing thread is supported by using the pop-out reply button.

Google says that it has heard from users that sometimes attaching emails makes more sense than forwarding separate emails. One example is in instances where users want to forward multiple messages related to a single topic. Sending emails as an attachment lets users write a summary email message to those recipients and attach the supporting emails. The attached email received by the user can be opened directly in their mail client.

Google notes that admins need to do nothing; end users will know when they have the feature added when the "Forward as attachment" option in the three dot-menu lands. When emails are sent as attachments, the attached email becomes a .eml file. When a .eml email attachment is clicked, it opens in a new window. Users can attach as many emails as they like.

The rollout is gradual for the feature with Google noting that it could take up to 15 days for everyone to have feature visibility, with the rollout starting on December 9 for rapid release domains. Scheduled release domains will begin the gradual 15-day rollout on January 6, 2020. The feature will be on by default and is coming to all G suite editions.