What is in store for Windows 10? The next major Windows 10 update will likely include some interesting aesthetic changes. Rumor has it that Windows 10 21H1, or Windows 10 Iron (Fe), will feature a new Windows Start menu.

Microsoft recently confirmed that the next major update is codenamed “iron” in a blog post. Fast ring participants will begin to test it out this upcoming June. Microsoft remarked in its blog, “The Fast ring is currently on our Manganese (Mn) OS branch. We expect the Fast ring to switch over to our Iron (Fe) branch toward the later part of June…” Interestingly, it appears that this piece of information was not supposed to be made available to the public. This blog post has since been edited.

One of the biggest changes will likely be an updated start menu. This past winter, the Windows Insider team showed off a new start menu that eliminates the controversial Live Tiles. The design would feature an “acrylic, fluent theme" with fewer accent colors and less distractions. The most recently leaked start menu does not exactly resemble the design that was introduced a few months ago, but there are many similarities. The Windows Insider team initially promised that “those that enjoy their Live Tiles will continue to be able to do so.” However, it does appear that the next major update will include a Start menu overhaul. 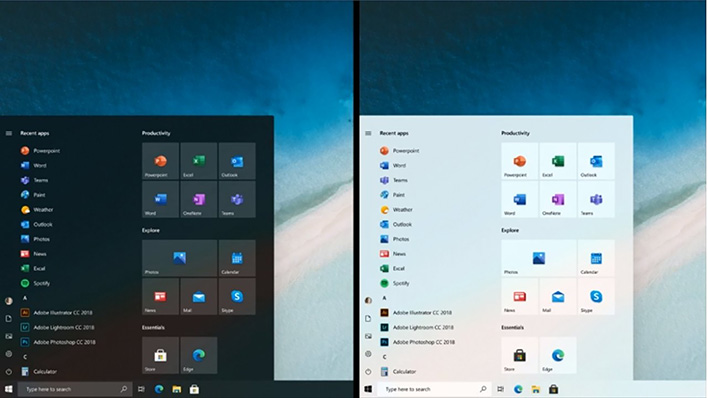 It is a bit unclear whether Fast ring insiders will get to test this Start menu out this coming June, or if the new design will be reserved for a later release. Microsoft does plan to release another minor update this year, Windows 10 20H2. Insiders may instead test the Start menu out before this update.

What else do we know about Windows 10 21H1? The 21H1 update will likely arrive at the beginning of 2021 and contain some major updates. The upcoming May 2020 update, or 20H1, will provide relatively minor changes in comparison. The edited blog post initially noted that 21H1 will include support for DxCore, D3D12, DirectML and NVIDIA CUDA. The June switchover will “expose this new functionality to Insiders.”

Microsoft most recently released a security update that created more problems than solutions. Several users complained of BSODs, issues installing the patch, and even audio bugs. The company is currently working to resolve the issues that were produced by the security patch.