Microsoft is still working to stomp out some bugs in the May 2020 Update for Windows 10, some of which are still preventing it from arriving on certain PCs. Be that as it made, work continues on future builds and features. As such, Microsoft is rolling out its Windows 10 preview build 20206 to Windows Insider who are subscribed to the Dev channel.
In case you missed it, Microsoft retooled its Windows Insider program this summer. It got of the "Rings" and replaced them with "Channels," with the Dev channel being intended for highly technical users. This is where members of the Windows Insider program can get their mitts on the newest features at their earliest point in development.
One thing to note—Dev channel builds are not indicative of upcoming Windows 10 releases. It's basically where new features are tested and tweaked, before advancing to the Beta channel, which consists of builds that are tied to future Windows 10 releases. 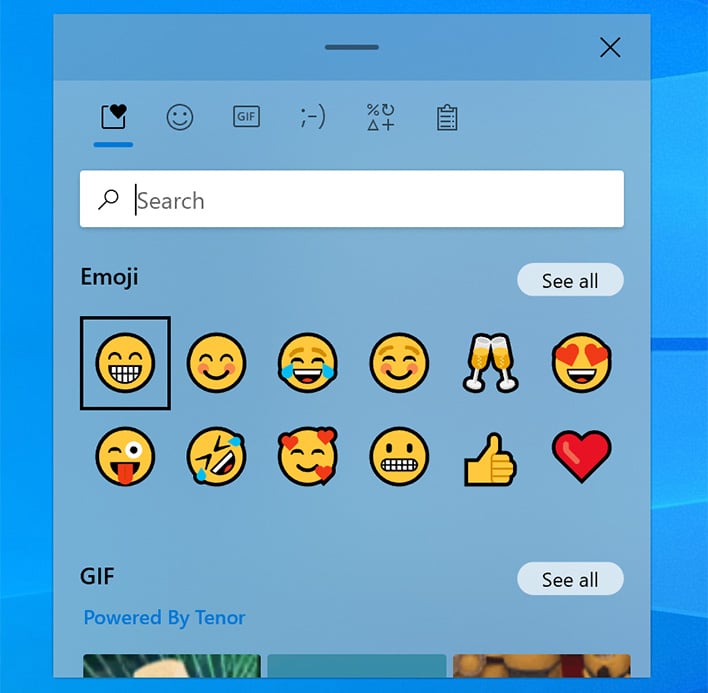 As for build 20206, Microsoft revamped the emoji picker. It has an updated look that is more aligned with Microsoft's Fluent design language, including a new acrylic background. Microsoft also improved the emoji search, and added animated GIF support to the mix.
"Over the last 3 years, we have been adding ways to express yourself when typing in Windows. In addition to adding an emoji picker and support for more emoji, we have also added support for many more languages, kaomoji, and symbols. We have also added ways to manage your clipboard history. We are evolving the emoji picker in Windows to bring many of these separate experiences together as well as introduce some new capabilities such as easy access to animated GIFs," Microsoft explains.
Outside of emoji updates, the latest preview build introduces voice typing. Microsoft is pitching it as a new and improved version of Windows dictation, so users can type with their voice whenever there's a text field on the PC.
"Sometimes, using your voice is more comfortable and efficient than typing on a keyboard – with Windows voice typing, you can relax your hands and just say what you want to write," Microsoft says.
Part of that entails auto-punctuation (so you don't have to worry about things like question marks), a modern design that is optimized for use with touch keyboards, and an updated back end to make the experience reliable.
Users who are testing the latest build can start a voice typing session by pressing the Windows key + H, or tapping the microphone button the touch keyboard.
Other features include an improved touch keyboard design with new animations and sounds, an option to keep the keyboard undocked, and the ability to change the cursor position using gestures on the space bar. And of course there is the usual round of bug fixes.