Microsoft has announced some significant changes to the way it's releasing new builds to all Windows Insiders. The software giant says that it's transitioning and converting the current ring model based on the frequency of builds to a new channel model that focuses on the quality of builds, and is intended to support parallel coding efforts. The revamping of the Windows Insider program will also mean that Insiders in the Office program and soon the Microsoft Edge and Microsoft Teams programs will see similar changes.

Microsoft says that the goal is to make it easier for existing Insiders to choose an experience that's best for them and to allow new Insiders to pick the right channel when they join. Microsoft says that the Insider community is important, and that it's working to align how all Insider programs work across Microsoft. In the past, Insiders were placed into two rings based on the frequency of when new builds would be delivered to their computers; those rings were Fast or Slow.

As the names imply, Insiders who wanted the updates the quickest chose the Fast ring and those who wanted more stable releases chose the Slow ring. Microsoft also operated a Release Preview ring for Windows 10 servicing updates. Microsoft says that it's come to realize that it was outgrowing the original concept rings with insiders running as many as three different releases between the rings as of the middle of 2019.

Later this month, Microsoft will roll out it's three new channels with the Fast ring becoming the Dev Channel, the Slow ring will be the Beta Channel, and the Release Preview ring will become the Release Preview Channel. The chart below outlines the users that Microsoft expects to use different channels. The Dev Channel is aimed at highly technical users who want to be the first to access the earliest builds in the development cycle. The Beta Channel is aimed at early adopters with Microsoft, saying feedback from these users has the greatest impact. The Release Preview Channel is for those who want stability and release validation in a build that is supported. 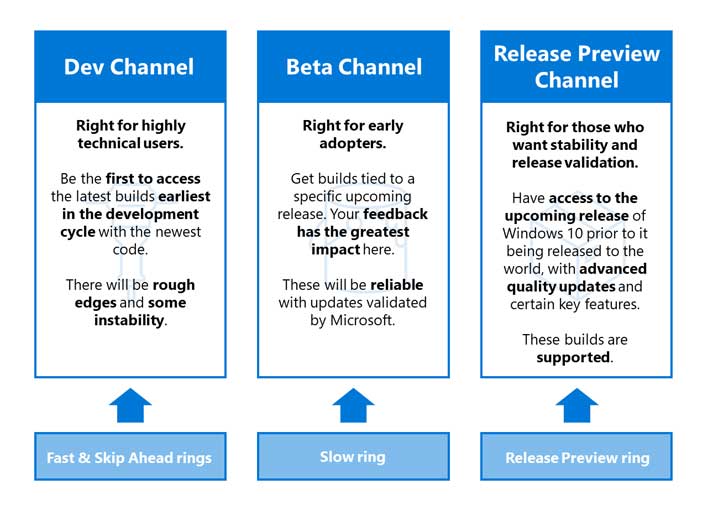 Office Insiders will have only the Beta Channel and Preview Channel. Windows Insiders will be automatically moved to the new channels if their device is currently flighting based on the channel that best corresponds with their current experience. Users aren't required to take any action for this to happen. Settings can be adjusted in the Settings > Update and Security > Windows Insider Program for those who want to try different channels. The channels transition will begin to show up on the Windows Insider Program settings page in builds later this month.

In other Windows news, May 2020 update users have reported that the update is causing some login issues with Chrome, OneDrive, and more.