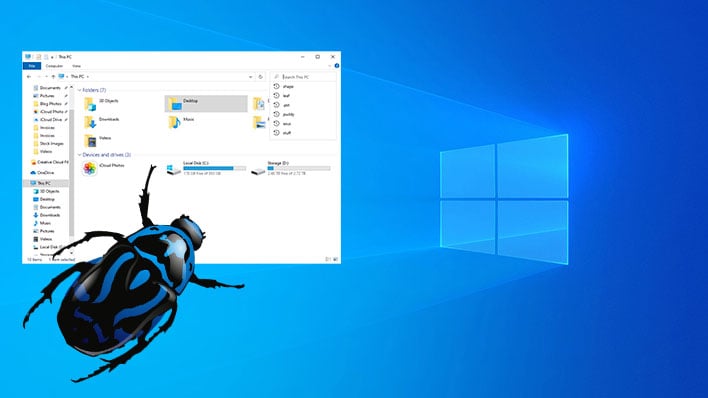 Fortunately, Microsoft's roll out of the November 2019 Update for Windows 10 has been far less problematic than some of the previous feature upgrades, based on the number of reported issues we are seeing. That said, it's not entirely problem free. Some users are reporting issues with the revamped search experience in File Explorer after applying the update.
It's a relatively minor thing in the grand scheme of things, though still annoying for those affected. One of the main reasons why it has been mostly smooth sailing with the November 2019 Update is because Microsoft took a different approach to its roll out—it was delivered as an enablement package, meaning the necessary files had been doled out to PCs with the previous May 2019 Update, and then Microsoft basically flipped a switch in November.
The November 2019 Update is also more like a Service Pack from the old days, rather than a featured-packed upgrade. Still, at least one issue has popped up. Microsoft added a feature to Windows 10 version 1909 that integrates Windows Search in File Explorer. This makes it so users can type a keyword in the search field and Windows 10 will spit out a bunch of suggested files.
That is where the issue lies. Several users have taken to Microsoft's support forums to ask for help with the new search experience.
"Ever since I updated to Windows 10 1909 the Search Box in the File Explorer is completely unuseable. It shows a text cursor but I cannot click inside the box or type any text into it. Essentially it's a text box with no 'wiring'. Any ideas how to resolve this issue? I'm having to resort to using a third-party search app just to find files in my projects," one user wrote.
Another user complained of not being able to paste a copied file name to search after applying the November 2019 Update. "I have to manually type the file name and press Enter. This is terrible!," the user stated.
"Hello, I’ve tested in two different machines and confirmed that after the 'feature update to windows 10 version 1909 via enablement package (KB4517245)' it’s no longer possible to copy-paste to the search box present in folders (upper right corner) using the mouse, the right click is completely disabled," another user wrote.
In some cases, the search file becomes unresponsive. At that point, a user must shut down File Explorer to get it working again, but even then, the issue is apt to come back after a while.
I have not experienced any of these issues myself, nor has BleepingComputer (which spotted the complaints) been able to reproduce the errors some users are seeing. So, it's not clear why the bug is appearing on some PCs and not on others. Hopefully Microsoft can nail down the culprit, though, and issue a fix.