In all likelihood, someone with a bit of free time on their hands is trolling by teasing a 3dfx comeback story, with an announcement supposedly right on the horizon. And I am totally fine with that, honestly—3dfx is such a legendary brand that I welcome the nostalgic reminder of an earlier era. It is fitting, then, that the legendary PC builders at Falcon Northwest, an OG boutique that is still going strong, is getting in on the fun with a Twitter post of its own.
For those who need catching up on the situation, a new Twitter account called @3dfxofficial recently popped up, and purports to be "the official Twitter handle for 3dfx." It has amassed several thousand followers in a matter of days (myself included), on the promise that "3dfx Interactive is coming back, 20 years later."
A "major announcement" is supposedly incoming this Thursday, and earlier today, the new account pumped more coal into the hype train's engine by promising to "discuss new hardware [and] goals for the next twelve months," adding that there will be "many exciting announcements this Thursday!"
This is almost definitely going to amount to a big fat nothing-burger, or the most drawn out Rick Roll ever. But rather than shrug it off, Falcon Northwest has decided to lean into the fun, with a post of its own. Check it out... 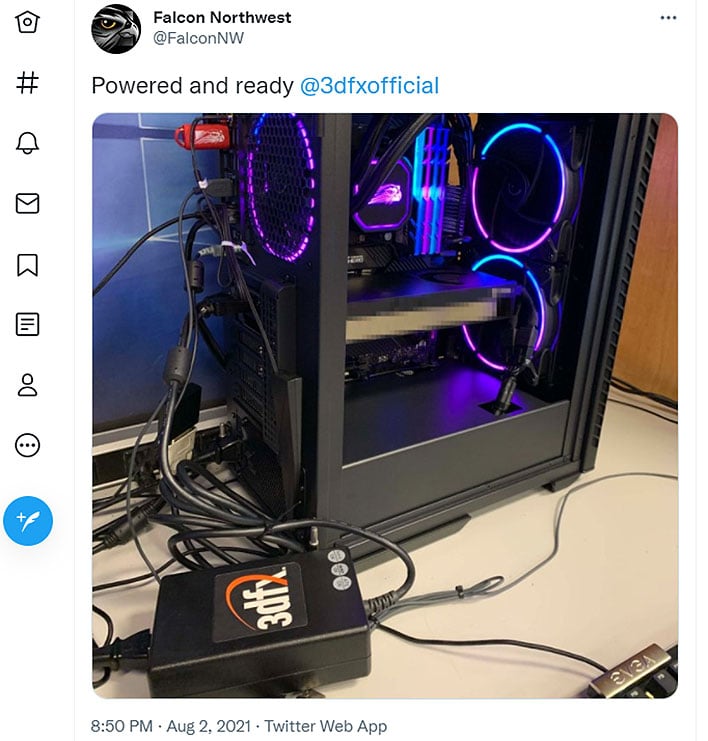 Unlike the Falcon Northwest Talon we reviewed a few months ago, the one in the photo above is attached to a 3dfx-branded power brick, which is attached to a blurred out graphics card (it looks like an NVIDIA Quadro model of some sort).
It looks like the same external power bricked that would have accompanied the 3dfx Voodoo 5 6000, had that card ever been released (instead, it got a modern revamp earlier this year, thanks to a modder who got his hands on multiple VSA-100 graphics chips and slapped them onto a custom PCB with more modern components).
Fun fact—Falcon Northwest ran at least one print ad featuring 3dfx, back in 1999. for the introduction of its Talon PC line. It advertised "an aggressive new gaming system by Falcon Northwest with guts by 3dfx." At the time, Falcon Northwest founder and president Kelt Reeves said in an interview that "3dfx will provide proven performance and reliability with a brand name people trust."
Better late than never? Not likely, but might as well have fun with the situation while it lasts!