Edward Snowden has gained Russian citizenship nine years after fleeing the United States and landing in Russia. On Monday, Russian president Vladimir Putin signed a decree granting citizenship to 75 foreigners residing in the country, with Snowden among them.

Snowden, a former NSA contractor, publicly exposed the US National Security Agency’s mass surveillance activity by leaking classified documents to a group of journalists in 2013. While some view Snowden as a whistleblower who was right to leak the information and should receive legal protections for his bravery and service to the American public, the US Government does not share this view. Snowden is wanted on charges of espionage and theft of government property, but Russia has refused to extradite him to the US.

Snowden ended up stranded in Russia in 2013 after the US revoked his passport, preventing him from boarding a flight to Cuba. Russia responded to Snowden’s predicament by granting him asylum, and he has resided there ever since. In 2020, a US court declared warrantless telephone dragnet surveillance illegal and acknowledged Snowden’s disclosures. That same year, Snowden gained permanent residency rights in Russia and declared his intentions to apply for dual US-Russian citizenship in a tweet.

Shortly after Putin granted him Russian citizenship, Snowden quote-tweeted this earlier tweet with the following message: “After years of separation from our parents, my wife and I have no desire to be separated from our SONS. After two years of waiting and nearly ten years of exile, a little stability will make a difference for my family. I pray for privacy for them—and for us all.” 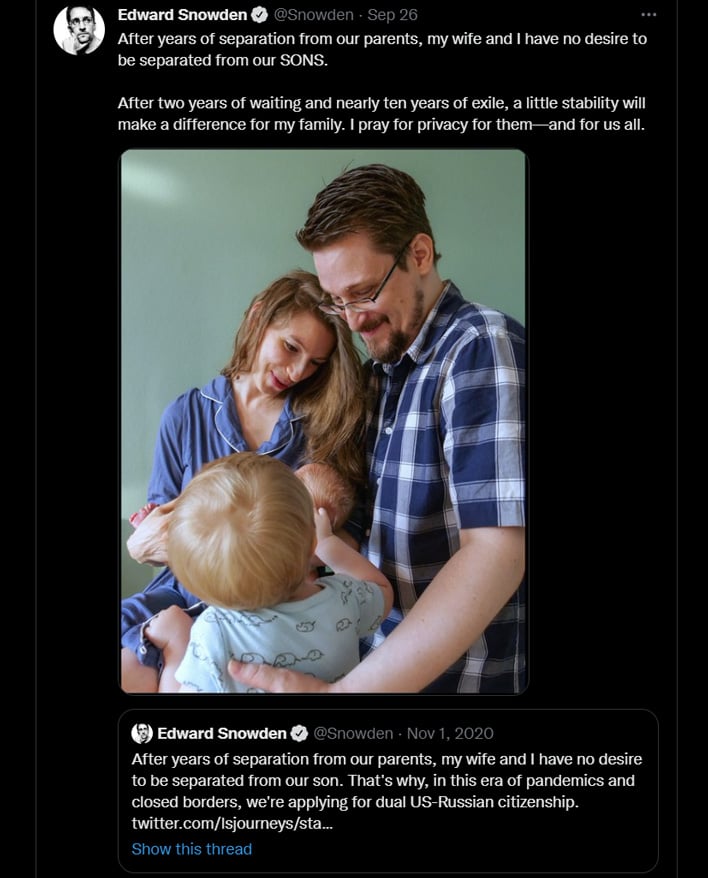 The US Department of State held a press briefing yesterday in which Ned Price, a spokesman for the department, was asked about Putin’s granting Russian citizenship to Snowden and whether the US Government still considers him an American citizen. Price replied with the following statement: “Our position has not changed. Mr. Snowden should return to the United States, where he should face justice as any other American citizen would. Perhaps the only thing that has changed is that, as a result of his Russian citizenship, apparently now he may well be conscripted to fight in Russia’s war in Ukraine.”

According to Reuters, Anatoly Kucherena, Snowden’s lawyer, told RIA Novosti, a Russian state-owned news agency, that Snowden could not be drafted into the Russian military because he had not previously served in the Russian army.