Drive makers have gotten into the unfortunate habit of swapping out key components that can potentially affect the performance of any particular solid state drive model, which introduces a sort of luck-of-the-draw factor for the buyer. Western Digital recently did this with its value-oriented Blue SN550 NVMe SSD. After catching some heat, WD has promised to update the drive model whenever it does something similar in the future.
As we noted in our WD Blue SN550 review, it is a superb option in the budget NVMe SSD sector. The drives are rated to reach 2,400MB/s of sequential read performance and 1,950MB/s of sequential write performance, both of which run circles around what you can get on the SATA bus (the fastest SATA-based SSDs top out at around 550-580MB/s). 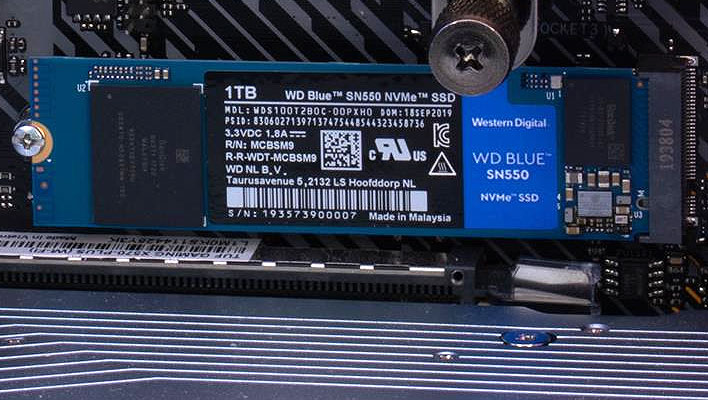 For the most part, we were impressed with the DRAM-less drive's performance (we reviewed the 1TB model), which shined bright nearly across the board. The problem with switching components is that evaluations like ours may not necessarily reflect what buyers will see, depending on which version they receive.
This came to light on the Blue SN550 when it was noticed that some drives were shipping with different flash memory chips, as well as different firmware.  The folks at Expreview got their mitts on the newer revision that uses memory chips labeled as 002031 1T00 with firmware number 233010WD and compared it to the original variants with 60523 1T00 NAND and firmware number 211070WD.
What the site found is concerning—once the allotment of single-level cache (12GB) was filled up, the revised drive's write performance dropped by more than half, to 390MB/s. That puts it more in line with the WD SN350.
To be clear, we have not compared the performance between the new and old revisions ourselves, so we can't vouch for the purported massive dip in writes after filling up the SLC cache. That said, WD did acknowledge the component swap in a statement, saying it "replaced the NAND in the WD Blue SN550 NVMe SSD" this past June, and "updated the firmware." It also acknowledged in a roundabout way these changes affected performance.

"At the time, we updated the product data sheet. For greater transparency going forward, if we make a change to an existing internal SSD, we commit to introducing a new model number whenever any related published specifications are impacted. We value our customers and are committed to providing the best possible solutions for their data storage," WD said.
It's not clear why WD made the change in the first place. Perhaps it was to save costs, or maybe situations like this are an inevitable result of the component shortage that looms over the tech industry. Whatever the reason, transparency is key so that customers know exactly what they are buying.
To that end, we like that WD will issue new model numbers in the future when it changes components. That would have been the correct course of action in the first place, but better late than never, right? Hopefully other drive makers adopt the same policy.