Western Digital this week pulled the wraps off the latest entry in its entry-level PCIe SSD family with the WD Blue SN570. As you might have already surmised from its naming, the WD Blue SN570 is the successor to the existing WD Blue SN550 lineup.

To hit lower price points, the WD Blue SN570 SSDs feature a DRAM-less design and use the PCIe 3.0 interface (instead of the newer PCIe 4.0 interface used by the WD_Black family). Western Digital hasn’t provided any details on the controller used in the new SSDs, but it is paired with BiCS 5 3D TLC NAND flash.

Given the PCIe 3.0 x4 interface, you won’t reach lofty 7,000 MB/sec read speeds like the WD_Black SN850. Instead, sequential reads cap out at 3,500 MB/sec across the entire lineup. However, sequential writes vary greatly depending on which capacity SSD you select. 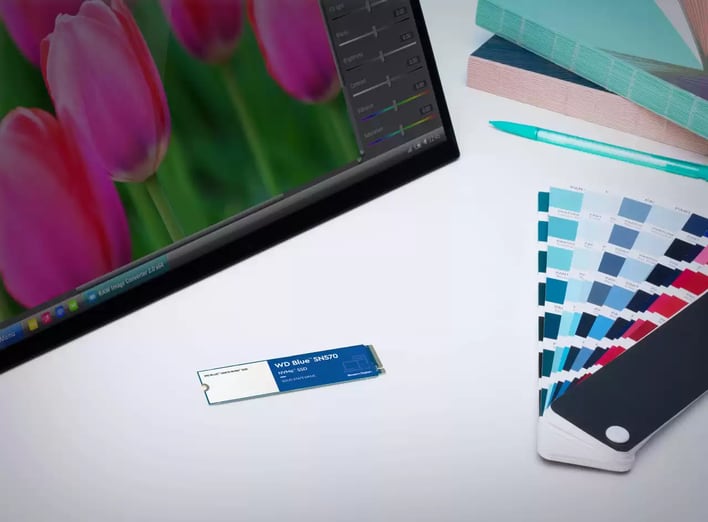 For example, the 250GB WD Blue SN570 is only capable of 1,200 MB/sec sequential writes, compared to a more compelling 3,000 MB/sec for the flagship 1TB SKU. The performance disparity also extends to write endurance, as the 250GB SKU is rated for 150 TBW compared to 600 TBW for the 1TB SKU. Regardless of these differences, all WD Blue SN570 SSDs come backed by a 5-year warranty.

Western Digital isn’t trying to rob your wallet with the WD Blue SN570 family, which is geared towards content creators. The 250GB, 500GB, and 1TB capacities carry a retail price of $49.99, $59.99, and $109.99, respectively, direct from Western Digital. We’d imagine that those prices could dip even further at retailers like Best Buy and Amazon in the coming months. If you want to purchase direct from Western Digital, the company says that all three SKUs will ship within the new 1 to 2 weeks.