WD Unveils The First-Ever Officially Licensed PlayStation 5 SSD But Are We Having Deja Vu?

One of the best features of the PlayStation 5 is the ability to upgrade the internal storage with an off-the-shelf solid state drive (SSD). There are certain size and speed requirements, but there are a whole lot of SSDs that are compatible with Sony's latest generation game console. In case you needed added peace of mind, however, Western Digital has teamed up with Sony to deliver the first officially licensed SSD for the PS5.
Where does the déjà vu come into play? WD is essentially rebranding (or at least repackaging) and its existing Black SN850 SSD for the PS5. So it's not actually an entirely new drive. Instead, WD said it spent hundreds of hours "rigorously testing some of the most graphic-rich titles" on the SN850 to ensure fast, smooth, and visually immersive gameplay without any issues.
"We're excited for this new journey with Sony Interactive Entertainment and the opportunity to bring the officially licensed drive to PS5 gamers," said Susan Park, vice president of Consumer Solutions Product Management, Western Digital. "Western Digital's WD Black brand was created to bring high-performance products to gamers everywhere. Combined with this innovative partnership, we aim to deepen our current commitment to developing storage solutions that enhance the gaming experience for all gamers." 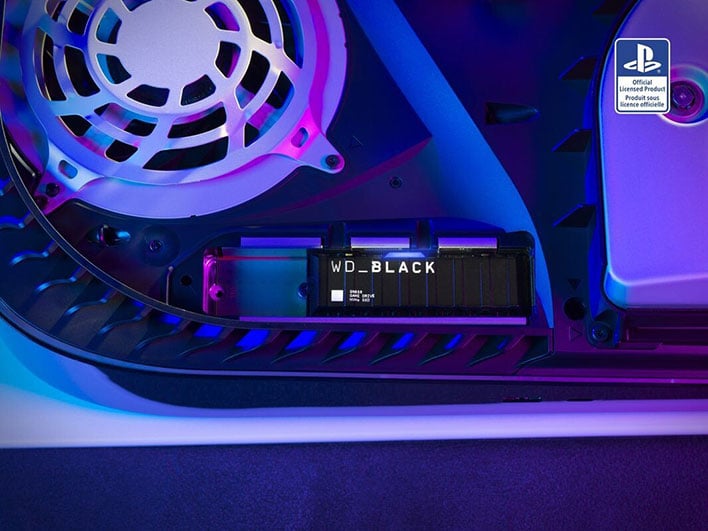 The licensed version for the PS5 comes with an attached heatsink. There are two capacities up from grabs—1TB for $169.99 and 2TB for $279.99. When the non-licensed SN850 models launched last October, they debuted at $229.99 for 1TB and $449.99 for 2TB. So the launch pricing on the licensed models are quite a bit less, though SSD prices in general have fallen in the past year. Here's how pricing shakes out current...
Pricing is skewed with Prime Day discounts in play right now (and other retailers trying to keep up with Amazon's sales), but if you're looking to add a Black SN850 to your PS5, we don't see any reason to wait for the officially licensed SKUs. They're the same drives as far as we can tell. The only caveat is availability—WD says its licensed SKUs will hit store shelves in mid-August, by which time prices could fall even further. That said, we're seeing the 1TB model listed as in-stock at WD's online store.