How To Watch Today's OnePlus 9 And OnePlus Watch Launch Livestream

Hey, you there. Are you interested in watching OnePlus unveil a new generation of smartphones and its first smartwatch? Then you have come to the right place. OnePlus is kicking off its OnePlus 9 Series launch event today, in which the company will talk about its newest mobile products, and you can catch the livestream right here.
Barring any surprises, OnePlus will unveil the OnePlus 9, OnePlus 9 Pro, OnePlus 9R, and OnePlus Watch today. The event kicks off at 10:00 am Eastern (7:00 am Pacific), and based on past livestreams of this nature, it will probably last anywhere from 30 minutes to an hour, give or take. So, grab yourself a drink, sit back, and take it all in...

While the new lineup of smartphones figures to be the main event, the OnePlus Watch is poised to be the company's first offering in the smartwatch category. OnePlus teased its unveiling in a recent Twitter post saying, "You asked for it. You're getting it." Incidentally, my mother used to say the same thing when I'd act up as a kid. Hopefully this is more enjoyable.

Previously filed patents related to the OnePlus Watch reveal it will sport a circular display, rather than a rectangular-ish one like the Apple Watch. It will also have swappable bands, including traditional leather and synthetic options. In addition, it seems there will be a "sport" version with a silicon band, for runners, joggers, and people who are active (or just prefer that style). 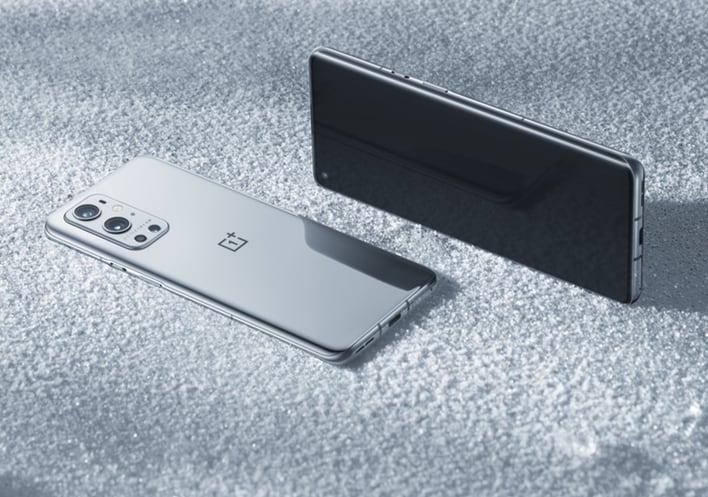 As for the upcoming smartphones, OnePlus CEO Pete Lau recently posted a handful of stunning renders on Twitter depicting the OnePlus 9 Pro, as seen above. Simply put, the new silvery color scheme, called "Morning Mist," looks fantastic. And according to Lau, this color options "takes 30 steps and more than 25 days to creating the final finish on this extraordinary glass."

One thing we can anticipate being a big point of focus during the event is the camera arrangement. Earlier this month, OnePlus announced a three-year, $150 million Hasselblad collaboration. As implemented on the new phones, the camera system will support 12-bit RAW images and be capable of recording 8K resolution video at 30 frames per second, or 4K video at 60 fps.
Official confirmation of the surrounding hardware is inbound today, but ahead of the event, we anticipate the OnePlus 9 series will leverage Qualcomm's Snapdragon 888 processor, along with 12GB or 16GB of RAM. It also seems reasonable that there will be 128GB and 256GB storage options, and maybe even 512GB (hopefully, anyway).