In case you missed it, the OnePlus 9 and 9 Pro smartphones are coming on March 23. That announcement seemed inevitable, since smartphones tend to launch on a roughly a production schedule. While the price of OnePlus smartphones has crept up over the years, shifting its reputation from that of value-priced flagship killer to a more traditional flagship maker, it seems like these phones always have a great blend of features and performance. However, if there's one hole in the OnePlus lineup, it's in companion devices -- particularly, wearable technology like smart watches.

That's apparently changing soon, however. The official OnePlus Twitter account has apparently confirmed previous rumors that a smart watch is inbound. The tweet merely says, "You asked for it. You're getting it." What exactly "it" is isn't immediately apparent from the animated GIF attached to the tweet. To us, several of the too-close-to-see renders look like watch bands, and another looks like the rounded side of a wrist watch. 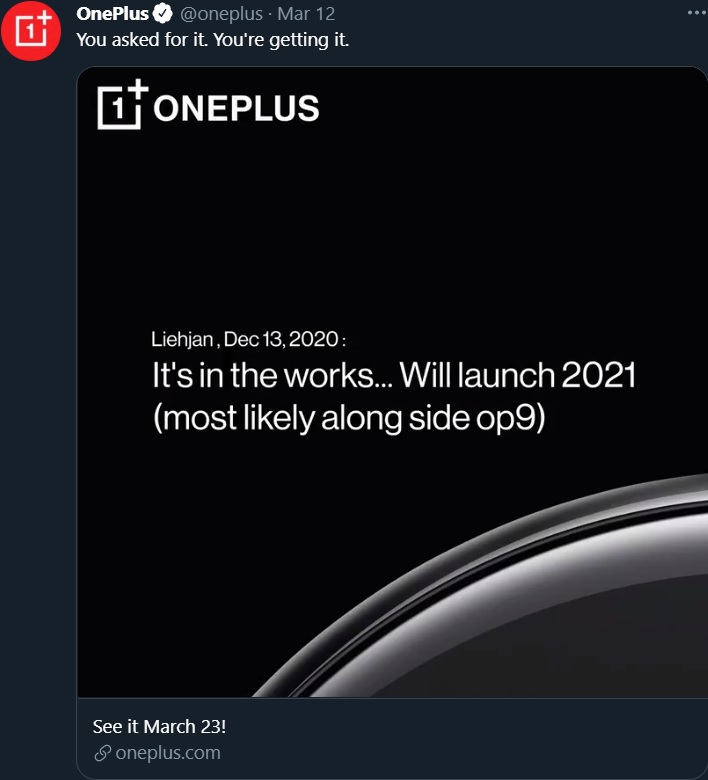 Fortunately we don't have to guess too much, as OnePlus has filed patents with the German Deutches Patente und Markenamt with some very detailed sketches of the watch itself. Unfortunately, beyond the drawings, there isn't much to the application. We know that the OnePlus watch will have a round face and swappable bands. It appears there will be a "sport" version with a silicon band and a more traditional leather or synthetic leather band.

Beyond the fact it's coming, and that OnePlus says it will be unveiled on March 23, we don't know much else about the coming wearable, particularly what OS it will run. What we do know, however, is that OnePlus is running a contest on its forum. Name the device from the images, but wrong answers only. OnePlus moderators say they'll pick nine of their favorite wrong guesses on March 23 and those entries will win whatever the unannounced product happens to be.


The OnePlus 9 will also launch on March 23, and so far it's shaping up to be a really nice device. The company entered a partnership with Hasselblad and it's expected that the coming smartphone will make use of the camera maker's technology. Along with the OnePlus 9, 9 Pro, and unnamed watch, it's also expected that there will be a lower priced OnePlus 9R, too. Regardless, the launch is now less than two weeks away, and as such, all mysteries will be unveiled.