In October, ZDNet reported that both Ubisoft and Crytek, maker of Cryengine, were hacked by a ransomware gang named Egregor. At that time, only a small part of data in a cybercrime “proof-of-life” sort of situation was posted. It was unknown how much additional date was available at the time, however, and it was also unknown how the data was acquired. All Egregor did was mock Ubisoft for the company's abysmal security practices. Egregor had the following to say on its site:

This developer if nominated not just for Hole of the Month. But also for the Clown of the Month Award. We found source codes in free access in the main network. Passwords in the doc files without any protection, all the employees and developers data and personal information, contract, game engines and a lot of more. Guys, if the goal of the last mission in your game about hackers was the hack of your company, we’ve done it. There’s our prize? The game WATCH DOGS: LEGION was completely downloaded from your company servers. There’s a possibility that soon we will make a present to all fans. We will compile and upload the game to public access. The games of such level should be distributed freely. Nobody should take money for this.


Now, only a week after game's launch, rumors swirling around the web are that the full dataset has been leaked, including Watch Dogs: Legion. A leak like this could be incredibly damaging to both Ubisoft and Watch Dogs: Legion. This could open the game to problems such as hacking, cheating, or modding; something that Ubisoft definitely doesn't want to deal with at this point. It could also potentially lead to the game’s encryption being broken if hackers are resourceful enough. In a statement to Rock Paper Shotgun, Ubisoft simply said “We are aware of the group’s claim and are currently investigating a potential data security incident.” 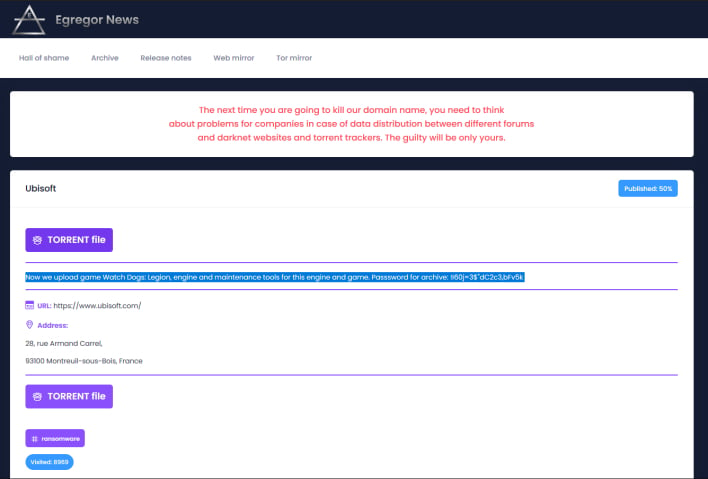 Egregor's torrent mirror appears to contain the game source code.
With that being said, it is incredibly ironic that the game about hacking has now been [allegedly] hacked and stolen from Ubisoft. Previously, the Egregor gang had the files up on a regular website for anyone to access.  That website appears to be down now, and the Egregor gang is not pleased as indicated by the red text in the screenshot above.  This anger is likely what prompted them to release the files online in full, as shown by the text highlighted in blue. We intend to check the validity of these leaked files as best we can in the coming hours. Stay tuned here at HotHardware for further updates on this developing information.