Just before the sun rose this morning at 5:19am EST, the United Launch Alliance (ULA) Atlas V 551 rocket launched from Cape Canaveral Space Force Station in spectacular fashion. Tagging along for the ride was some extraordinary NASA technology, namely the Laser Communications Relay Demonstration (LCRD) and Ultraviolet Spectro-Coronagraph (UVSC) Pathfinder.

Since the beginning of space exploration radio waves have been the tried and true method of communication. But because of the complexity of the collection of data nowadays NASA knows that even with the proven track record of radio waves the need for more advanced communication is and will be needed. Enter the age of optical communications.

Optical communications are set to begin providing some significant benefits for missions in space. Included is bandwidth increases of 10 to 100 times more than radio frequency systems. Also, optical communication utilizes decreased size, weight, and power requirements. This smaller size should allow for more science instruments, while less weight means a cheaper and more affordable launches. Add in less power and drain on the spacecraft's batteries and you can begin to see the advantages of this technology.

Once LCRD is in orbit, the engineers at LCRD's mission operations center in Las Cruces, New Mexico will take over and start the activation process by turning on the payload and preparing to start transmitting data via infrared lasers. LCRD will spend its early days sending practice test data to and from its ground stations. As messages from the ground are sent up as radio waves, LCRD will reply with optical signals. The test data that will include things such as spacecraft health data, tracking and telemetry will be used to ensure LCRD is working properly.

Future missions will begin sending its data to LCRD, which will in turn be relayed down to designated ground stations on Earth using LCRD's optical communications. This is not NASA's first usage of a relay satellite, however. NASA has been taking advantage of communications relay satellites since 1983. By using relays, missions are not bound to staying within direct line-of-sight to antennas on Earth. This allows for broader communication coverage. LCRD will be a two-way communication system due to its ability to both receive and send data from missions in space, making it NASA's first two-way, end-to-end optical relay.

LCRD and its optical signals do come with one drawback. Optical signals cannot penetrate cloud coverage, like its counterpart radio frequency communications can. Therefore, NASA has chosen two ground stations, one located in Table Mountain, California, and the second in Haleakala, Hawaii. These two locations were chosen because of their historically minimal cloud coverage. NASA hopes that if one location has cloud coverage, the other will have clear enough skies for LCRD to communicate with.

The second piece of technology that rode along with the LCRD was the UVSC Pathfinder. Pathfinder is a joint NASA-U.S. Naval Research Laboratory experiment that will be dedicated to studying the origins of solar energetic particles (SEPs). These particles are considered to be the Sun's most dangerous form of radiation.

Leonard Strachan, an astrophysicist at the U.S. Naval Research Laboratory in Washington, D.C. said, "It's a pathfinder because we're demonstrating new technology and a new way to forecast this type of space weather. Right now, there's no real way of predicting when these particle storms will happen."

SEPs are believed to originate at the lowest regions of the Sun's outer atmosphere, or the corona, and this is where UVSC Pathfinder will focus on. Right now scientists are unable to reliably predict when the Sun will release an eruption that produces SEPs. While the Sun releases eruptions nearly daily, there are only around 20 disruptive solar particle storms during any given 11-year solar cycle. Scientists believe understanding, and hopefully one day predicting these solar storms, are crucial for facilitating future space exploration. 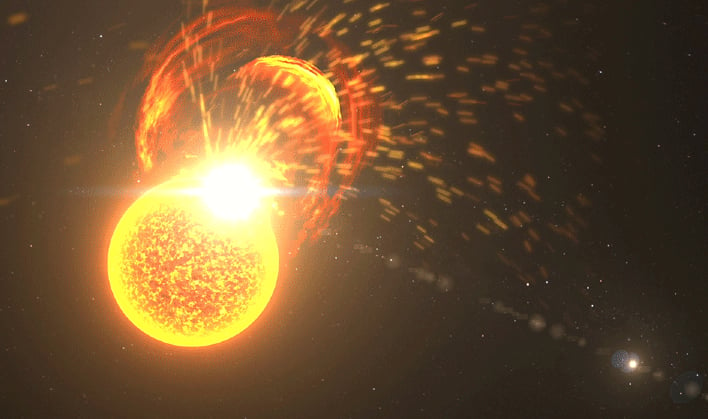 Scientists postulate that SEPs originate from swarms of seed particles that reside in the corona that are already ten times hotter and more energetic than their next door neighbors. SEP swarms are considered very serious in the eyes of NASA, because when it comes to spacecraft they can destroy electronics, corrupt a satellite's computer programming, damage solar panels, and perhaps disorient a spacecraft's star tracker that is used for navigation. It is likened to driving through a blizzard and getting lost.
On top of all that, SEPs can pass through a spacecraft or an astronaut's skin, where they can cause damage to cells and even DNA. This damage could increase the risk of cancer in the astronauts who are in the SEPs path. One can see why being able to predict when these SEPs will occur is so important.

The Atlas V rocket also carried along with it two Department of Defense satellites as part of its Space Test Program 3. All of the technology sent into space this morning should lead to some very crucial steps in making space exploration more effective and safe.