Since the beginning of space exploration, radio frequencies have primarily been the method of data communication. All of that is about to change as NASA hearkens in a new age of laser space communications. And no, Dr. Evil fan club members, sharks will not be used for the frickin' lasers (we're still waiting on that).

Instead, NASA is set to launch its Laser Communications Relay Demonstration (LCRD) this fall. NASA is billing this as a revolutionary way of communicating data from space to ground. As of now, there are two locations for ground communication known as Optical Ground Station (OGS) -1 and -2, which are located on Table Mountain, California, and Haleakala, Hawaii.


The two locations were chosen by NASA because of their clear weather conditions, since clouds and turbulence can disrupt laser communications as it enters our atmosphere. The locations also compliment one another, in that when it is cloudy at the California site, it is typically clear at the one in Hawaii and vice-versa. The two stations run almost autonomously 24 hours a day, 7 days a week. 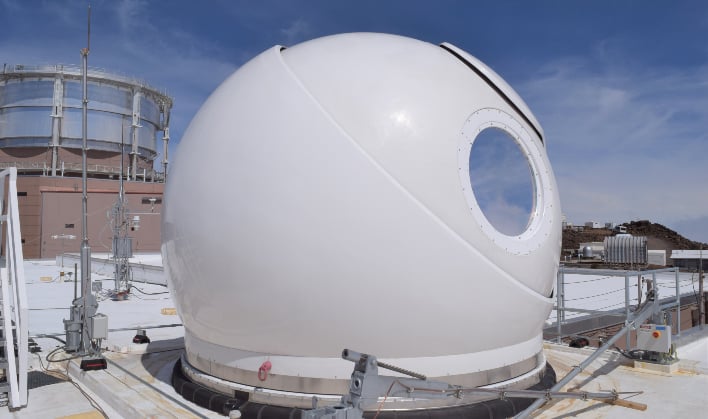 While weather conditions typically cooperate by providing clear skies at both locations, NASA engineers still have to reduce the effects of atmospheric turbulence on the data it receives at OGS-1 and OGS-2. This is achieved by adaptive optics.

Tom Roberts, manager of OGS-1 development and operations at NASA's Jet Propulsion Laboratory, says, "An adaptive optics system uses a sensor to measure the distortion to the electromagnetic signal that's coming down from the spacecraft. If we can measure that distortion, the we can send it through a deformable mirror that changes its shape to take out those aberrations that the atmospheric induces. That allows us to have a nice, positive signal."


Before all this laser talk takes place for mission support, LCRD will spend around 2 years conducting tests and experiments. During testing OGS-1 and OGS-2 will serve as simulated users, sending data from one station to LCRD and then down to the next. All these tests will be in preparation for future implementation of laser communication systems and eventually support in-space missions.
Even though LCRD is a laser communication payload, it will still utilize a radio frequency (RF) connection to the ground. NASA will manage all this communication, both laser and RF, out of LCRD's mission operations center in White Sands.

NASA continues to advance its technology as space exploration continues to look to go further into the depths of space. It will be interesting to see how laser communications will work alongside Lunanet, Nasa's Lunar Network.

While all the laser talk can remind one of Dr. Evil daydreaming of his laser equipped sharks, it is definitely exciting to think about the possibilities that all this new technology will bring.