Ursid Meteor Shower Is The Last Celestial Light Show Of 2021, How To See It

The Ursid Meteor shower is the last chance for everyone to see a celestial light show this year. So get ready for the Little Dipper to pour out some shooting star soup into our night sky.

The night sky has been a busy place as of late. Recently the Geminid and Leonid meteor showers have sent shooting stars dancing across the night sky. We even had the comet Leonard pay us a visit after being gone for 70,000 years. But the last celestial light show of 2021 is taking place now, as the Ursid meteor shower takes its turn on the dance card.

The Ursid meteor shower takes place each year and runs from about December 17th to the 26th. This particular meteor shower often peaks around the December solstice, which in 2021 is on December 21st. The only issue with Ursid is that it happens around the same time as the full moon, which was this past weekend. So as the Moon is still near full and in its Gibbous Phase, it makes seeing an Ursid meteor more difficult. However, if you are wanting to try and catch a falling star or two, the morning of December 22nd should be the optimum time to spot one even though the Moon will still be 90% full.

The Ursid meteor shower will radiate from the constellation Ursa Minor, the Lessar Bear, also known as the Little Dipper. This makes locating the prime location for seeing meteors streaking along the night sky a bit easier. Typically, the meteor shower produces around 5 to 10 meteors per hour. On rare occasions, spectacular showers of 100 or more meteors have been observed. Being this meteor shower takes place in the winter, those in the Northern Hemisphere will probably want to bundle up if they are going to partake in the show. 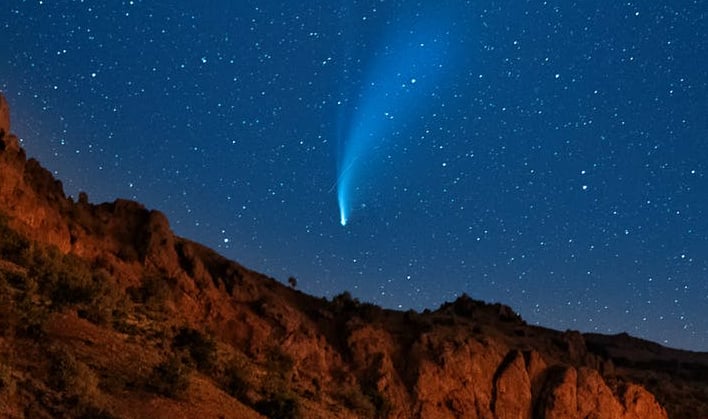 As with any meteor shower, the best location to view the Ursid meteor shower will be from a location far from city lights. City lights tend to drown out the night sky and make viewing more difficult. So, if you are wanting to view as many meteors as possible you will need to find a location out in the countryside. Grab a blanket or lounge chair and head out to your favorite place far from artificial light and enjoy as much of the show as possible. The best time to view will be in the early hours of December 22nd.

Those located in the Northern Hemisphere will find the Big Dipper and the star Kochab in the north-northeast part of the sky at around 1 a.m. your local time, which happens to be the prime time for viewing the meteor shower. Those farther up north, such as those of you in Canada, the Little Dipper is circumpolar, or visible all night. Once you locate it you can find the star Kochab below Polaris, the North Star, around nightfall.

Hopefully if you are planning on trying to catch a few of the last falling stars of 2021 you will find success. Be sure to stay warm and make your final wishes of the year as 2022 is quickly approaching.