Geminid Meteor Shower To Light Up The Sky With Green Fireballs, How To Watch

Before ol' Saint Nick has all of us looking up into the night sky for his Rudolph and his red nose, the Geminid meteor shower is set to give us a different show of lights in mid-December. If you are not a fan of the cold, NASA has you covered with a live-broadcast as well.

November and December seem to be fairly busy months for viewing meteor showers. Last month had us looking toward the stars in hopes of viewing a bit of the Leonid meteor shower. There was also an opportunity to spy Comet Leonard for the first time in around 70,000 years during the first part of December. And now we are about the be treated to another nighttime spectacle in the sky with the Geminid meteor shower.

Each December sky gazers have the opportunity to watch the Geminids meteor shower. This particular meteor shower is active now and will peak on the night of December 13th and into the morning of December 14th, and will remain active until December 17th. So, even if you miss tonight's show, there will still be more opportunities for you to catch an encore for a few more nights. 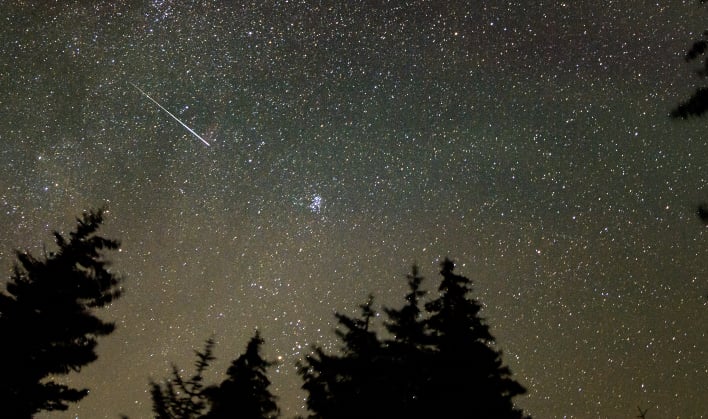 The Geminids origin can be traced to debris from a celestial object known as 3200 Phaethon, whose beginnings are a point of some debate. For some, Phaethon is considered to be an extinct comet. This is based on observations showing some small amount of material leaving the surface of Phaethon. However, others will argue that it must be an asteroid due to its orbit and similarity to the main-belt asteroid Pallas.

With all that in mind, it is worth noting that the Geminids are denser than meteors belonging to other meteor showers. This allows them to get as low as 29 miles above Earth's surface before burning up. Those belonging to Perseids and the like burn up at a much higher altitude.

The Geminid meteor shower should be viewable for everyone no matter where you are located in the world. For those located in the Northern Hemisphere, you will have a better view of the showers than your friends located in the Southern Hemisphere. This is because as you venture south and move toward the South Pole, the altitude of the Geminid radiant, or the celestial point in the sky where the meteors appear to originate, gets lower and lower above the horizon. So, as you move further south you will see fewer Geminids in the night sky.

Along with possible weather issues in viewing the shower, the Moon can play a part as well. This is due to the moonlight possibly "washing out" the dimmer meteors as they fall toward Earth, and meteor shower watchers seeing fewer bright ones as well. This year the Moon is going to be around 80% full during the peak of the shower, which is not ideal if you are planning on viewing. However, if you are willing to stay up past 2:00am wherever you may be located, the moon is expected to set around that time and give you a few hours of moonless sky to watch before twilight.

If you are not a fan of the cold weather where you live, NASA plans on broadcasting a live stream of the shower's peak December 13-14 via a meteor camera at NASA's Marshall Space Flight Center in Huntsville, Alabama. NASA does give a bit of a head's up that this is if the weather cooperates. The live broadcast is set to begin at 8pm CST on the NASA Meteor Watch Facebook page.

Bill Cooke, lead for NASA's Meteoroid Environment Office, said, "Rich in green-colored fireballs, the Geminids are the only shower I will brave the cold December nights to see." Whether you are of the same mind-set as Bill, or plan on viewing from the comfort of your warm couch via the live broadcast, Geminid should put on quite the show for you the next few nights (weather permitting!).