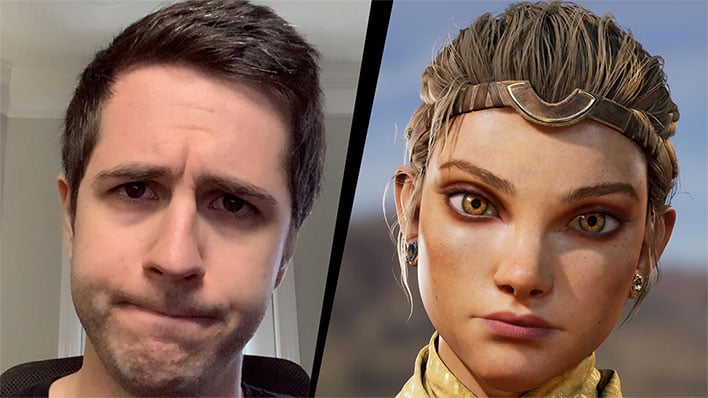 It's pretty incredible what today's smartphones can do, even if we mostly use them to upload lunch and dinner photos to Facebook. They can do so much more, though. For example, Epic Games just released a Live Link Face app for iOS that lets developers capture and stream high quality facial animation in real time from iPhone and iPad devices.
This data can be imported onto characters in Unreal Engine 4.25. The actual tracking leverages Apple's ARKit and an iOS device's TrueDepth front-facing camera.
"Designed to excel on both professional capture stages with multiple actors in full motion capture suits as well as at a single artist’s desk, the app delivers expressive and emotive facial performances in any production situation," Epic Games explains.
Have a look at the app in action...

According to Epic Games, robust timecode support and precise frame accuracy enables seamless synchronization with various stage components, such as cameras and body motion capture contraptions. It can also connect to the stage master clock using Bluetooth, and is versatile in the sense that it can be used multiple types of settings.

"Live Link Face’s feature set goes beyond the stage and provides additional flexibility for other key use cases. Streamers will benefit from the app’s ability to natively adjust when performers are sitting at their desk rather than wearing a head-mounted rig with a mocap suit, as Live Link Face can include head and neck rotation data as part of the facial tracking stream to provide more freedom of movement for their digital avatars with just the iPhone," Epic Games says.
It's certainly nifty, and based on the same underlying technology Apple uses for its Animoji and Memoji effects on iPhone devices. The Live Link Face app just kicks things up a notch—several notches—by playing into the Unreal Engine and its capabilities as well.
If you want to try it for yourself, grab the Link Link Face app from Apple's App Store and check out the documentation.