One of the key selling points of the Disney+ streaming service is The Mandalorian, a new series based in the Star Wars universe set 25 years prior to the events of Star Wars: The Force Awakens. It is a remarkable epic, and as you might imagine, computer graphics play heavily into its creation. Fortunately for geeks like us, Industrial Light & Magic posted a nearly 5-minute video highlighting some of what goes into shooting an episode of The Mandalorian.
At the heart of it all is a massive 270-degree semicircular video wall and ceiling. It spans 20 feet high and is 75 feet in diameter, and is powered by seven high-powered machines.
"Digital 3D environments created by ILM played back interactively on the LED walls, edited in real-time during the shoot, which allowed for pixel-accurate tracking and perspective-correct 3D imagery rendered at high resolution via systems powered by NVIDIA GPUs," Industrial Light & Magic explains.
What we are essentially getting is a peek behind the curtain. It's no surprise that NVIDIA's GPUs are providing the graphical grunt necessary to create these sprawling and varied landscapes. But we can also thank advances in game engine technology, and specifically Epic Games and its Unreal Engine (the same as powers Fortnite).
A large chunk of the show is created in pre-production. It is far more advanced than using just green screens and light, and it allows for in-camera effects as well. Everything is designed to be changed as needed, and be filmed by the camera, with real-time environment effects. The technology used allows the actors to be in virtual scenes, rather than filmed on a green screen and added to scenes in post-production—the background and foreground exist harmoniously. 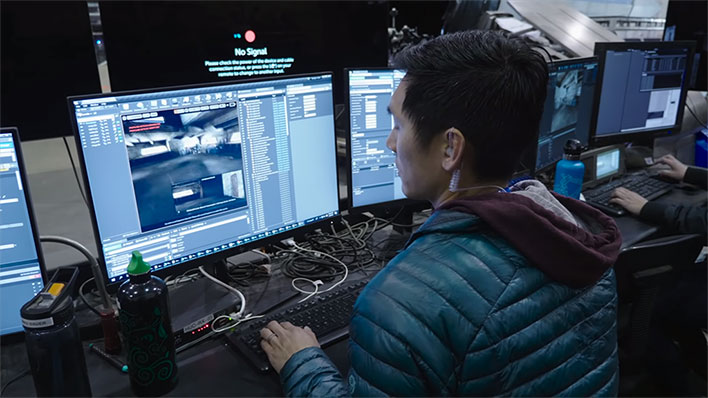 "The environments were lit and rendered from the perspective of the camera to provide parallax in real-time, as if the camera were really capturing the physical environment with accurate interactive light on the actors and practical sets, giving showrunner Jon Favreau, executive producer and director Dave Filoni, visual effects supervisor Richard Bluff, and cinematographers Greig Fraser and Barry Baz Idoine, and the episodic directors the ability to make concrete creative choices for visual effects-driven work during photography and achieve real-time in-camera composites on set," Industrial Light & Magic says.
This also allows for a dynamic set—weather and time of day can change on a whim, locations can change instantly, and even background items like entire mountains can be moved and repositioned. And while this is all going on, the actors and actresses can see the changes in real time, which we imagine makes their jobs easier. Interestingly, more than half of the first season of The Mandalorian was filmed using this StageCraft method, as it is called.
It is something to keep in mind when you binge watch the show, if you haven't already consumed the first season.
Images Source: Industrial Light & Magic