Update 10/29/2021: After this story was published, a representative for Ubisoft reached out with an official response. "“Our customer support teams released an article more than three years ago detailing some recommended steps for players to try as a starting point for troubleshooting – it has been removed to prevent confusion. It is not our recommendation that players discontinue use of any specific PC applications unless they are experiencing an issue.”

Original Article: Ubisoft and poor performance sometimes go hand in hand for PC enthusiasts. We're no strangers to the woes some of its games have caused us when they launched. Admittedly, Ubisoft does have a history of improving performance and stability over time, which is why some might deem it best to just wait a bit before jumping on the latest Far Cry or Assassin's Creed title. But what Ubisoft has done this time is almost a head scratcher, it's blaming everyone but itself for poor application performance. Just like the headline, this one has us rolling our eyes pretty hard.

Ubisoft's announcement to its users came by way of Twitter linking to a post on Ubisoft's help site giving the advice to disable a suite of programs in order to improve performance. What's interesting here is how Ubisoft has changed its wording on the site regarding solving 'interference with your games'. The help site now reads "Certain Microsoft services or third-party software...please disable programs temporarily." It then recommends turning them on one by one to see which one causes the issue. 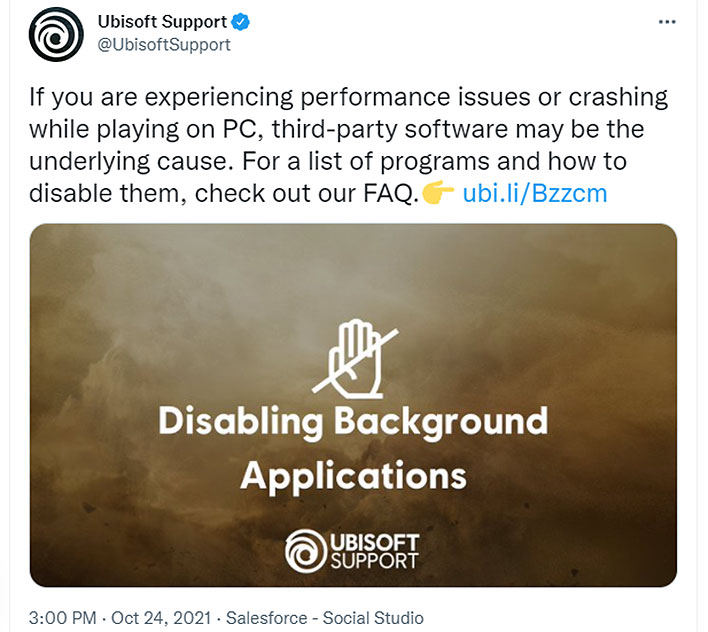 Why is this interesting to us you ask? Well, the post didn't start out that way. according to OC3D. Instead, it listed popular third-party applications by name: Discord, Teamspeak, MSI Afterburner, Riva Tuner, and even Skype. Perhaps Ubisoft changed the list to not cause issues with its partners (and did so before it could be properly cached for us to grab a screenshot).

These popular software packages are used by many PC gamers for communication and system monitoring purposes while they're gaming. Discord alone is one of the most popular ways of communication these days, and you would think that somewhere along the way Ubisoft would have had at least one of its testing systems running it. From our vantage point, these programs should absolutely be part of Ubisoft's validation procedure. Gamers shouldn't have to give up using these programs as we'd wager that more PC gamers have at least one of these on their computer than have Ubisoft Connect. Stop blaming everyone else Ubisoft, and work with them instead.