The Tesla Cybertruck is no doubt an interesting entry into the full-size pickup truck market. We say this not just because the Cybertruck is an electric vehicle but also because of its design. Just look at the thing; it's quite an assault on the eyes in an effort to shift the paradigm of how a truck should look.

That brings us to recent commentary surrounding the Cybertruck. Earlier this week, an opinion article claimed that the hulking EV would become Tesla's first flop. Not counting its first low-volume Roadster, which was loosely based on the Lotus Elise, the Model S and Model X were successful entries for the automaker. In addition, the Model 3 brought Tesla to a mainstream audience, and the Model Y -- fueled by crossover mania -- has surged to become the company's best-selling vehicle. 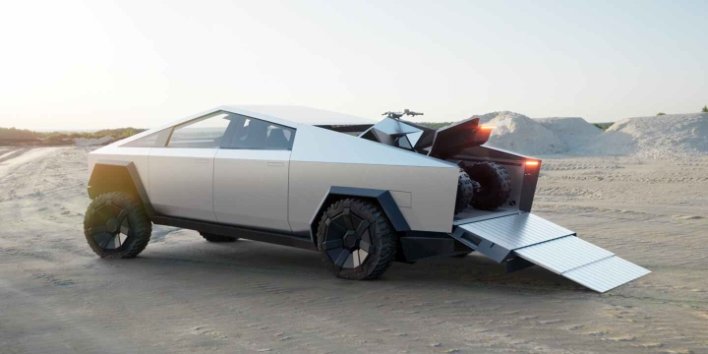 But the Cybertruck, at least from a design standpoint, has a few challenges. The flying buttresses make leaning over and obtaining items from the bed (without opening the tailgate) difficult. Its downward-sloping roof intrudes on headroom. And its overall size is massive, making even something like a Ford F-150 Super Crew look small in comparison.

Faced with these complaints, Tesla CEO Elon Musk was quite humble. He even acknowledged that the Cybertruck might be a flop. However, Musk bluntly said, "I don't care" what others think. In his eyes, it's okay if people want to hate on the design of the Cybertruck because they can all go out and buy another cookie-cutter full-size gasoline engine truck if they want.

To be frank, there is always some chance that Cybertruck will flop, because it is so unlike anything else.

I don’t care. I love it so much even if others don’t.

Other trucks look like copies of the same thing, but Cybertruck looks like it was made by aliens from the future.

"Other trucks look like copies of the same thing, but Cybertruck looks like it was made by aliens from the future," Musk added. In that sense, the Ford F-150 Lightning is an electric pickup with a more conventional design. At the same time, the Rivian R1T is mostly conventional, with a few design flourishes made possible by its clean slate EV platform.

However, despite Musk's comments, preorders for the Cybertruck have already surpassed one million units. That's nothing to scoff at for an EV and likely represents two or three model years' worth of production for Tesla. Whether all those reservations convert into actual sales remains to be seen, however.

On a slightly related note, Musk also talked about the Cybertruck's door handle, or rather, the lack of door handles.

In end, we kept production design almost exactly same as show car. Just some small tweaks here & there to make it slightly better.

Having all four wheels steer is amazing for nimble handling & tight turns!

That looks like a solution to a problem that never existed, but it is totally in keeping with Tesla's often bizarre design choices for its vehicles. What do you think about the Cybertruck? Is it a cool design for a truck, or one that goes a step too far into the future? Tell is in the comments section below.