Historically, teardowns of Apple's MacBook Pro laptops have not gone all that well, to put it nicely. Apple has not exactly been a champion of the right-to-repair movement, and more like a begrudging participant. Is the new MacBook Pro with Apple's upgraded M1 Pro and M1 Max processors any different? We'll have to wait to find out, but a quick gut-check reveals that Apple included at least one very welcome design change.
Replacing the battery inside the revamped MacBook Pro lineup appears much easier this time around. This is something that is often underappreciated. Laptops in general (not just Apple's) have trended away from user-replaceable battery packs to integrated units, as overall notebook designs have become thinner, lighter, and more premium in their makeup (there are exceptions, of course).
The problem with that approach is that lithium-ion batteries don't last forever. There is a limited number of drain and charge cycles, and over time, battery life degrades. Fortunately, even as laptop makers push increasingly premium build designs, the built-in batteries are still sometimes relatively easy to replace on some models, if you're willing to get your hands a little dirty.
That seems to finally be the case with the MacBook Pro as well. The folks at iFixIt offered up a preliminary view of the guts of Apple's retooled MacBook Pro 14 and found some delightful surprises. Among them were battery pull-tabs.
"Even better, it appears the battery isn’t trapped under the logic board. That could mean battery swaps without removing all the brains first—a procedure we’ve been dreaming about for a while," the teardown experts noted. 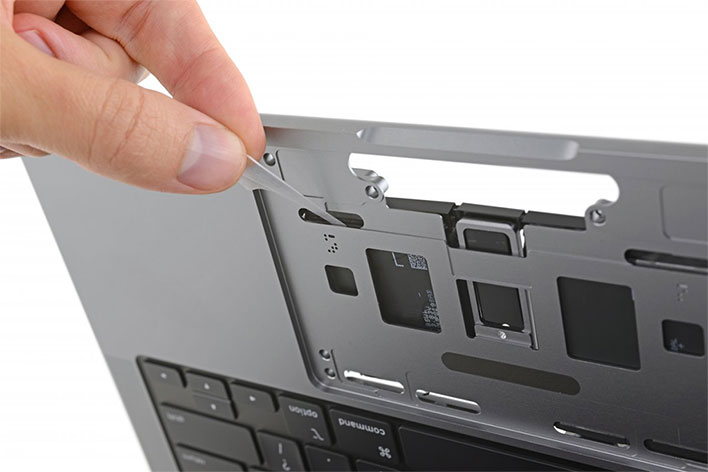 There are four outer battery cells, each with thin white stripes that serve as pull-tabs. None are immediately visible on the middle cells. However, after removing the trackpad, cutouts reveal themselves and offer access to pull-tabs for the middle cells too.
It doesn't appear as though the battery back is glued, though the MacBook Pro teardown teaser doesn't note this definitively. Guess we'll have to wait for the full teardown to know for sure. In the meantime, check out the teaser, which also contains a bonus Apple Polishing Cloth teardown (yes, seriously), complete with a tip on how to double your value if you actually buy one for $19.