TeamGroup has launched what it claims is the world's first M.2 form factor solid state drive (SSD) equipped with an industrial grade vapor chamber cooling solution, the N74V-M80. The pitch is that porting vapor chamber cooling over to M.2 SSDs is an effective way to prevent performance-robbing heat buildup. Because as you know, SSDs deal with too much heat by throttling, just like CPUs and GPUs. 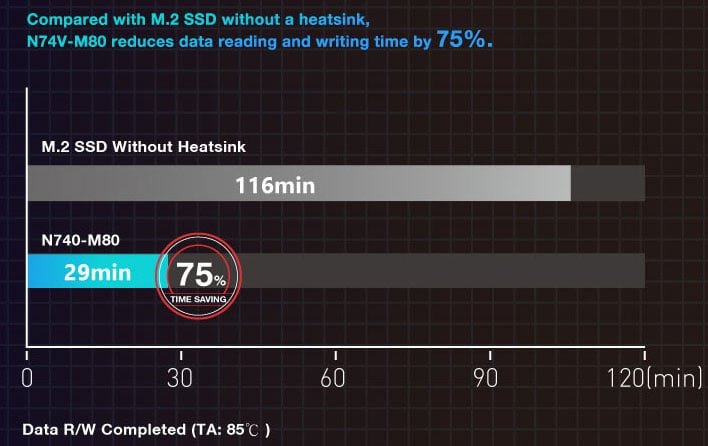 It sounds swell in theory, though we're skeptical how much difference this patented heatsink design has over a traditional heatsink. TeamGroup hasn't shared any performance claims in that regard. Instead, it claims the fancy cooler delays the slowdown mechanism (i.e., throttling) to ultimately reduce data write times by a massive 75 percent, compared to no heatsink at all.
TeamGroup said it adopted the vapor cooling technology that is found in some mobile devices and redesigned it from the ground up for this new SSD line.

"Through the specially designed VC liquid cooling tubes, cooling fluid is pumped to the heat zone of PCIe M.2 SSD controller. Heat is then transferred to the aluminum fin heat sink with a convective design via gas-liquid phase transition to enhance thermal performance. The N74V-M80 combines the functions of heat absorption, conduction, and dissipation to better transfer and regulate thermal energy.," TeamGroup explains.
Whether this is actually worthwhile in a form factor that's roughly the size of a stick of gum, we'd have to run some direct comparisons to know for sure. Beyond the vapor chamber element, the heatsink on the N74V-M80 sports an aluminum finned design with grooves for air to flow over the drive.
This is a PCIe 3.0 model that's rated to deliver up to 3,445MB/s of sequential read performance and up to 2,520MB/s of sequential writes. Those are fast in a vacuum, but outclassed by today's fastest PCIe 4.0 models, which push speeds north of 7,000MB/s. There's also the impending launch of consumer PCIe 5.0 models—they're already available in the service space, such as Kioxia's new CM7 series boasting 14GB/s reads.
To be fair, it doesn't sound like TeamGroup is targeting home consumers, and instead has industrial applications in its sights. No pricing information is available, only that the N74V-M80 is offered in 128GB, 256GB, and 512GB capacities.