If you have a need for speed in the data center, Kioxia hopes to satiate your hunger for blazing fast storage with its new CM7 series, which is now shipping to customers. Designed around the PCI Express 5.0 bus and offered in Enterprise and Datacenter Standard Form Factor (EDSFF) E3.S and 2.5-inch form factors, these newly minted drives serve up dense capacities and 14GB/s of read throughput.
That's also a notable metric because it approaching the saturation level of the PCIe 5.0 x4 interface that's on tap here. These are NVMe drives, and without accounting for overhead, the maximum theoretical throughput is around 16GB/s. There's still room to deliver even faster throughput than what the CM7 series delivers, but not a whole lot.
The other notable bit is the continued push towards to the EDSFF E3.S form factor in the data center. Kioxia introduced the first EDSFF drives last year and is now expanding those options with its CM7 series.

"PCIe 5.0 will deliver new levels of performance and will usher in a wave of EDSFF form factor SSDs, helping to replace the 2.5-inch form factor for servers and storage," said Jeff Janukowicz, research vice president at IDC. "We expect the EDSFF form factor to grow to over 50% of enterprise SSD unit shipments by 2026. With the new CM7 Series family of SSDs, KIOXIA is well positioned to capitalize on the transition to EDSFF." 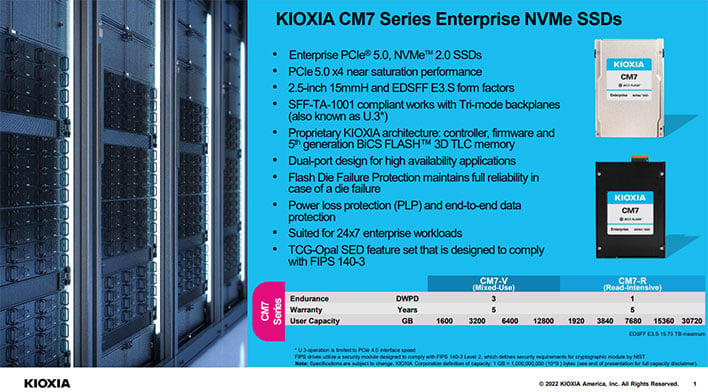 There are actually two versions of the CM7 series being offered. One is a mixed-use variant (CM-V) rated for up to three drive writes per day (DWPD) and offered in capacities ranging from 1.6TB to 12.8TB, and the other is a read-intensive version (CM-R) rated for one DWPD and offered in capacities ranging from 1.92TB all the way to 30.72TB. So it comes down to a choice between higher endurance or higher storage capacity.
Both models pair 5th generation BiCS Flash 3D triple-level cell (TLC) memory chips with a proprietary Kioxia controller. They're also both built to withstand 24/7 enterprise workloads, while doubling the performance of the previous generation drives.