Things have been relatively quiet on the Windows 10 on Arm front for a while now. We haven’t seen many (if any devices) launch this year, and even Microsoft’s last Surface Pro X refresh was mild (to put it lightly) with a slightly enhanced SQ2 SoC.

However, that could change tomorrow at Microsoft’s Fall Surface event. We’ve already heard rumblings about the debut of the Surface Pro 8 and the Surface Duo 2, but signs are now pointing to an upgrade for the Surface Pro X. According to WindowsLatest, the next-generation Surface Pro X just received its Energy Star certification.

The device carries the model number 2010, which was also found on a device that recently cleared the Federal Communication Commission’s regulatory hurdles. Interestingly, the Energy Star documents allege that the Surface Pro X uses an SQ2 SoC; however, this is likely a placeholder. In addition, we must remember that the existing SQ2 is based on the Qualcomm Snapdragon 8cx Gen 2 platform, which was a slight update to the Snapdragon 8cx first announced in late 2018. In other words, it’s time for a significant performance upgrade from Microsoft. 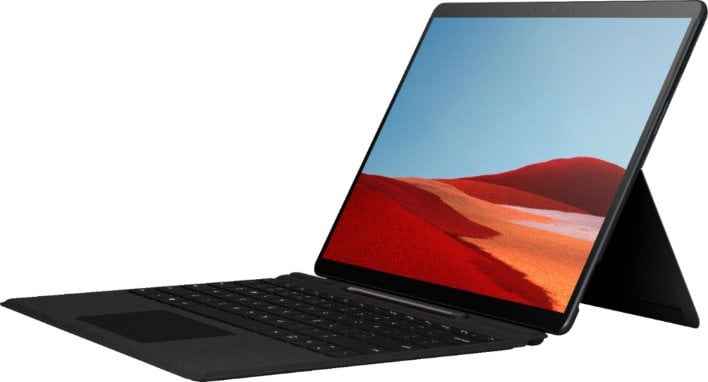 The documents also confirm that the Surface Pro X comes with 16GB of RAM and supports Windows 10 on Arm and Windows 11 on Arm.

The current-generation Surface Pro X features a 13-inch display (2880x1920), two USB-C ports, and weighs just 1.68 pounds. It also has an integrated 4G LTE modem, up to a 512GB SSD, and up to 15 hours of battery life. There have been rumors that the next-generation convertible could upgrade the display with a 120Hz refresh rate (like what’s rumored for the Surface Pro 8), and we’d love to see the integrated cellular connectivity upgraded to support 5G. The option for up to 1TB of onboard storage also seems like a near-certainty at this point.

The Surface Pro X has a base price of $999, and we don’t expect Microsoft to stray from that entry-point when it announces the next-generation model tomorrow.