Microsoft has just announced two new products that expand its Surface lineup of first-party Windows 10 PCs. Not surprisingly, both of them are products that we've previously covered in leaks: a refreshed Surface Pro X and the all-new Surface Laptop Go.

We start things off with the Surface Pro X, which was first introduced late last year as the company's first PC with an Arm-based processor. The Microsoft SQ1 SoC used in the original is based on the Qualcomm Snapdragon 8cx SoC, but the new Surface Pro X is also available with the new SQ2 SoC. Although Microsoft didn't come right out and say it, we'd assume that the SQ2 is based on the newly announced Snapdragon 8cx Gen 2 Platform. The primary difference between the two is that the SQ1 features an Adreno 685 GPU while the SQ2 brings in a slightly faster Adreno 690. 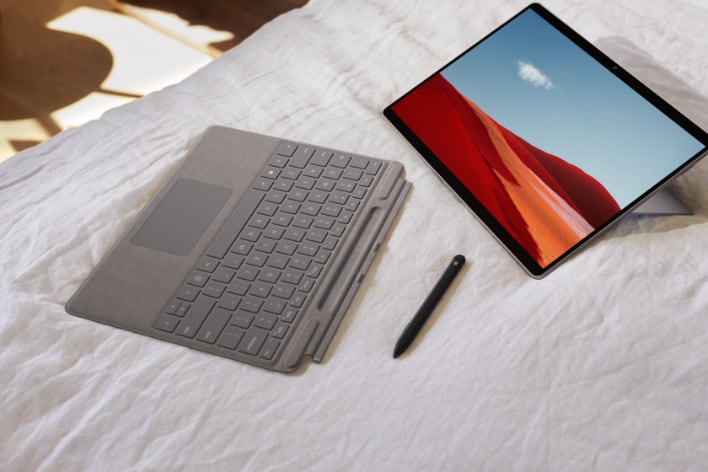 Interestingly enough, although the Snapdragon 8cx Gen 2 supports the addition of a separate Snapdragon X55 5G modem, Microsoft is sticking with the integrated Snapdragon X24 Gigabit 4G LTE modem already included on the SQ2 chip. Perhaps Microsoft couldn't find any additional space inside to accommodate the Snapdragon X55 or just didn't see the demand for adding that capability.

Microsoft is now promising up to 15 hours of battery life for both the SQ1 and SQ2 versions of the Surface Pro X, which is an increase from 13 hours on the original. All of the other specs are a near match for the original including the 13-inch PixelSense Display (2880x1920), 8GB or 16GB LPDDR4x RAM configs, up to a 512GB SSD, Wi-Fi 5 and Bluetooth 5.0 support, and a Windows Hello compatible front-facing camera. The Surface Pro X is also now available in a new Platinum finish which joins Matte Black. 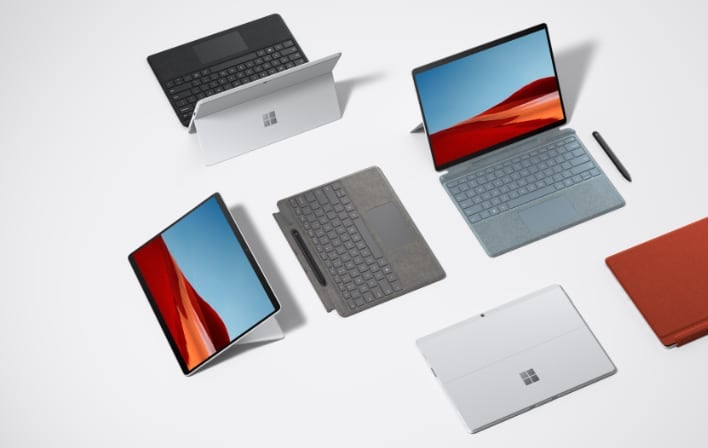 However, what most people want to know is how much software compatibility has improved since the original Surface Pro X debuted around this time last year. Well, Microsoft says that it made optimizations to Windows 10 on ARM to improve performance across the board, and has introduced a native version of the Microsoft Edge browser along with a native Microsoft Teams client. In addition, Visual Studio can run natively with Windows 10 on ARM devices, and the company remains committed to supporting x64 apps via emulation with an update coming later this year. 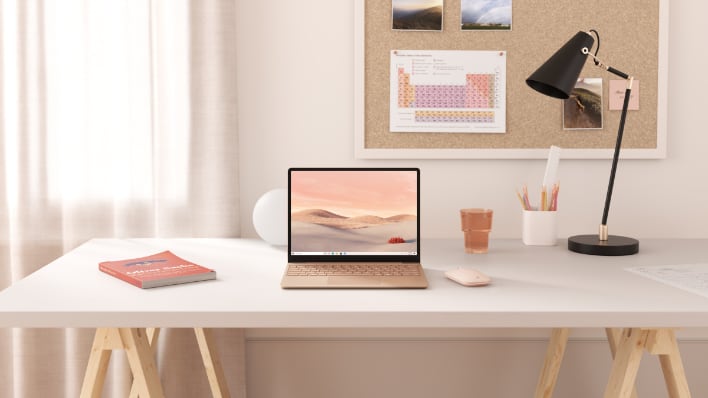 While most new laptops being announced these days are running Intel's new 11th generation Tiger Lake platform, the Surface Laptop Go is sportin' a 10th generation Ice Lake-based Core i5-1035G1. 4GB of RAM comes standard, and you can upgrade to 8GB or 16GB (in commercial configurations). 64GB of eMMC storage is standard, while 128GB and 256GB SSD options are available. 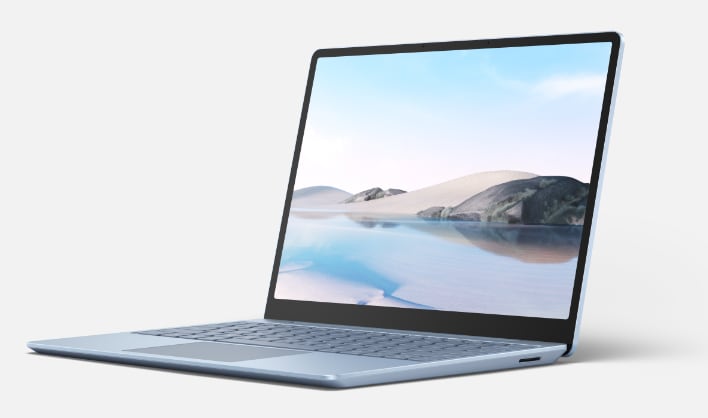 Whereas the Surface Pro X is stuck with just Wi-Fi 5 support, the Surface Laptop Go brings with it Wi-Fi 6. Other features include Windows Hello sign in with a fingerprint reader embedded into the power button, 720p webcam, Omnisonic speakers, and a Precision Trackpad. When it comes to its chassis, the top half is constructed from aluminum, while the bottom half is made of a polycarbonate composite resin; it will come in either Ice Blue, Sandstone, or Platinum finishes. Finally, Microsoft is quoting up to 13 hours of battery life for the Surface Laptop Go.