It seems that just about everyone's excited about Valve's Steam Deck, the tiny portable computer with big PC gaming aspirations. Right out of the gate, just securing a position to pay for one was a hot commodity on online marketplaces like eBay. That doesn't seem to be slowing down any time soon, either. Already, excited gamers are dreaming about the possibilities of the little Steam engine that could.

The company's explosive presales prove that out, as right now the Steam Deck's listing says that it's available for preorder starting at $399, but won't be in customer hands until "after Q2 2022." In the meantime, Valve's hype train hasn't stopped, as a few select outlets got their chance to check out the potent portable in a supervised hands-on session. Lots of interesting tidbits came out of the discussions that followed those sessions, but the one that catches our eye the most is using the system to drive a VR headset.

Apparently, Valve plans on the Steam Deck being capable enough to power virtual reality experiences. The Verge asked Valve product designer Greg Coomer about the possibility and he seemed pretty pumped about the idea, though he wasn't able to confirm anything just yet. He told the publication, "We’re not ready to say anything about it, but it would run well in that environment, with the TDP necessary... it’s very relevant to us and our future plans." 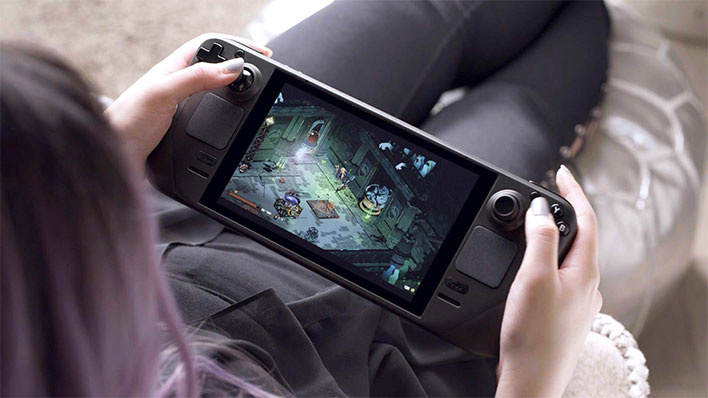 While future plans are still hazy to those outside of Valve HQ, the fact that Coomer was able to say that the company was already thinking about VR is promising. The Steam Deck's APU is designed to target a minimum of 30 fps on the entire Steam library, but VR's been with us for quite a while now and many rendering techniques like Variable Rate Shading have come to ease the burden of rendering virtual scenes. Using the Steam Deck to drive a virtual reality experience would be exciting and could help drive adoption, in our estimation.

Coomer had a lot more to say about the Steam Deck, including how the company plans to improve performance. For any game running the Vulkan graphics API, Valve intends to distribute pre-compiled shaders, for instance, that are optimized for the AMD-powered chip inside the unit. Also, Valve seems to have no plans to make games exclusive to the device. Contrast that with Half Life: Alyx, Valve's most recent big VR experience, which had to be hacked to run without goggles.

It's going to be a while before folks who haven't already gotten in line will be able to get their hands on the Steam Deck. However, it looks like Valve is doing its best to make sure that those who can pick one up will be able to enjoy a host of features. The company is also putting its engineering efforts into making it resistant to joystick drift and fun to play for years to come.