Valve dropped a rather intriguing bombshell on the gaming market on Thursday when it revealed the Steam Deck. The 7-inch handheld gaming PC runs a SteamOS flavor of Linux and comes with some relatively powerful hardware under the hood: a custom quad-core AMD Zen 2 CPU that pairs with an RDNA 2 GPU.

Preorders for the Steam Deck kicked off yesterday at 1 PM EST, and it didn't take long for enthusiasts to crash the Steam store, causing all sorts of issues. The device is priced at $399, $529, and $649 respectively for 64GB, 256GB, and 512GB configurations. Unsurprisingly, the first batch of preorders sold out quickly, not only to eager gamers but also scalpers.

Unlike most product preorders, which require you to pay the full price of the product upfront, Valve only requires a $5 refundable deposit. And according to Valve, the customers that were able to get their orders in yesterday should have their Steam Decks ship in December, barring any unforeseen production hitches (which seem to be common these days). 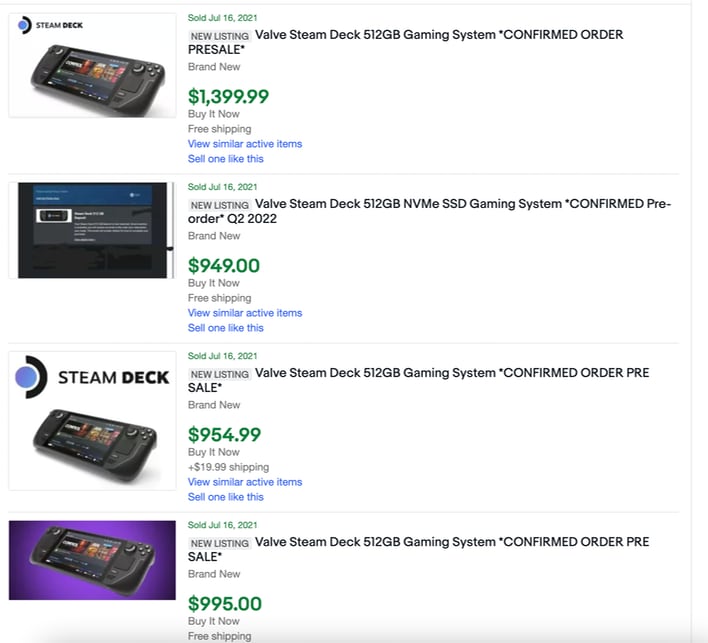 Given the tight early supplies and the fact that many people will want to be the first on the block to have a Steam Deck in December, scalpers were also among those that joined in on the preorder madness. A quick trip to eBay reveals that many people who missed the initial rush were more than willing to pay top dollar for a "confirmed preorder reservation."

Someone paid $859 for a 256GB Steam Deck versus its $529 asking price, while the $649 512GB Steam Deck sold for as high as $1,599 in one listing (although two listings went for slightly lower at $1,399 and $1,249, respectively). That's a lot of money to fork over for a Steam Deck and is reminiscent of the scalping mania that occurred during the early days of the PlayStation 5 and Xbox Series X.

With that said, Valve did try to implement some protections to make sure that the steam Deck went to actual gamers and not scalpers. The initial preorders were only available to customers that made a Steam purchase before June 2021 and were limited to one per customer. This alone was enough to cut down on fake accounts created to cash in on the Steam Deck rush.

It should be noted that preorders for the Steam Deck have since reopened for all three configurations, although it will be a while before they ship. Unlike the first batches that should arrive before the end of 2021, Valve says that preorders placed today for the 64GB and 256GB SKUs won't ship until Q2 2022. If you want the more expensive 512GB SKU, it won't arrive until Q3 2022.