The Steam Deck is fully-released now, and reviews have shown that while it's not flawless, it's a fantastic value for PC gamers that want to play on the go. For as little as $399 you get a powerful handheld that can play just about anything on the market competently—as long as your game runs on Linux with Proton, anyway.


Naturally, folks have been comparing the Steam Deck against its handheld-PC competition, and foremost among the contenders is the AYANEO NEXT. On paper, it looks like a solid matchup: both have quad-core Ryzen CPUs, both have 8 CU (Compute Units) Radeon integrated graphics, and both use 8" 1280×800 LCDs. That's about where the similarities end, though.

We don't have either of these devices on hand, but super mecha and popular low-end hardware reviewer ETA PRIME has taken it upon himself to do a head-to-head between the Steam Deck and the AYANEO NEXT. He compared the systems in both Linux and Windows, and tested a small sampling of benchmarks ranging from Geekbench and 3DMark to real game tests, using God of War, Witcher 3, Elden Ring, and Forza Horizon 5.


If you're familiar with the hardware of these two devices, then, things go more or less like you'd expect. While the AYANEO NEXT uses a modern Zen 3 APU, the Steam Deck's CPUs are based on the older Zen 2 architecture, and they run lower clocks, to boot. However, it has the benefit of a much more efficent RDNA2 GPU, while the AYANEO NEXT's Ryzen 7 5800U is saddled with the old Vega architecture. The Steam Deck also benefits from having faster LPDDR5 memory. 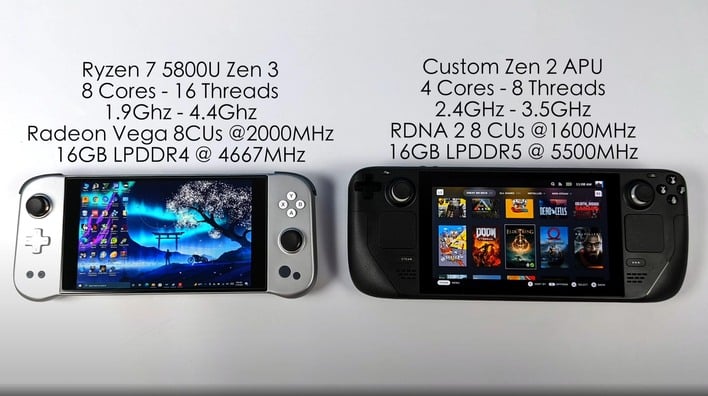 So saying, the AYANEO NEXT demolishes the Steam Deck in Geekbench, but the two handhelds more or less tie in 3DMark—as long as the AYANEO is in its 28W mode. The manufacturer offers 15, 28, and 35-watt power presets on the NEXT, and the AYANEO needs to be bumped up to the 28W setting to be competitve with the Steam Deck in 3DMark or in games.


That bears out through the rest of ETA PRIME's testing; in God of War, Witcher 3, and Forza Horizon 5, both systems provide playable performance in their native 1280×800 resolution, usually with low in-game settings, but the AYANEO handheld is using more power to do so. It does come out ahead in Elden Ring as that CPU-heavy game struggles a bit on the low-clocked Zen 2 cores of the Steam Deck; it's still generally playable on Valve's handheld, though, and users can benefit from Valve's optimizations for that title, too. 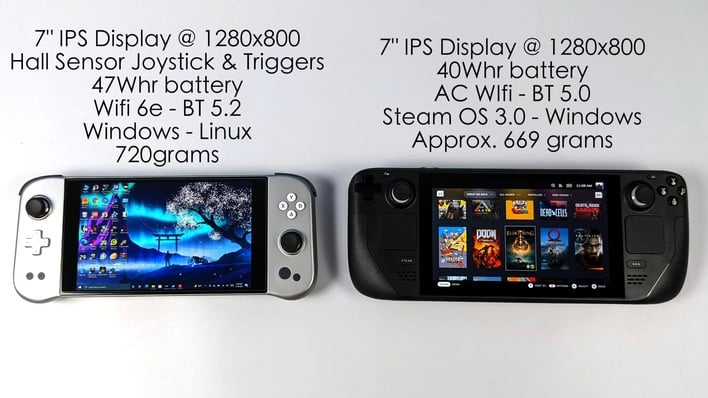 As ETA PRIME says, the proverbial elephant in the room when comparing these two devices is their price. The AYANEO NEXT is over USD$1300, while the Steam Deck's cheapest version starts at just $399. Despite their similar game performance, that's not really a fair comparison, because the AYANEO NEXT comes with more accurate and precise Hall-effect sensors on its joysticks, Wi-Fi 6E, rumble, a slightly larger battery, and more storage than you can even get in a Steam Deck: 1TB, upgradeable to 2TB.


Of course, the Steam Deck has its advantages too; the front touchpads, the rear buttons, and deep Steam integration including fully-functional in-game quick-resume. That's to say nothing of its superior efficiency, which will ultimately mean better battery life. Comparing the two handhelds objectively, it's difficult to recommend the AYANEO NEXT for pure gaming, but if you wanted to use it as your primary PC (by hooking it up to a dock), the faster CPUs could be a bigger benefit.
Images in this post from ETA PRIME's YouTube video, embedded above.