If you came to me in the early 2000s and told me that one of the top-selling Nintendo franchises in the 2020s would be a competitive multiplayer shooter game, I would have asked you where you acquired the intoxicants you are currently enjoying. Nintendo selling a multiplayer shooter? Nonsense!


It's true, though: Splatoon was a smash hit for the Wii U—as much as anything was a smash hit on that poor, ill-fated system—and the sequel, released in 2017 for the Switch, was an even greater success. Naturally, then, it is about time for the third game, and indeed, Nintendo just devoted one of its "Direct" livestreams entirely to Splatoon 3. 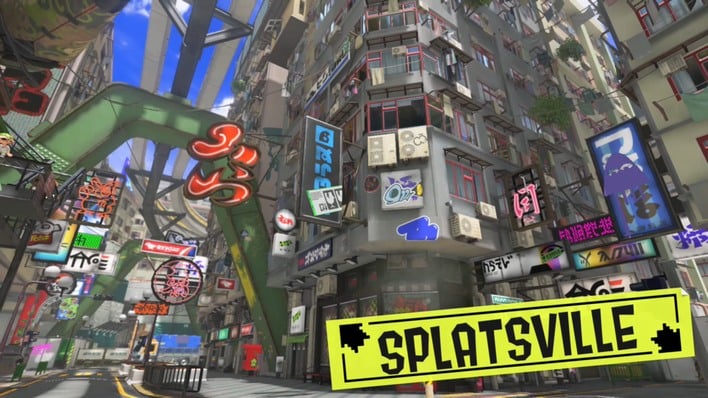 The new game takes place in a region known as The Splatlands, in a city called Splatsville. The Splatlands are connected to Inkopolis, the setting of the first two games, by a massive bridge, and that bridge features as one of numerous new stages in the upcoming title. Many of the stages from Inkopolis return as well, although it doesn't look like you can venture to the city outside of battles in the new title.


Splatoon 3 is a direct sequel to Splatoon 2, which means it carries over all of the weapons and game modes from that title. However, there's also all kinds of new content, of course. That includes some new gameplay features: the Squid Surge lets players rapidly ascend walls, while the Squid Roll is a defensive move players can use to stay alive when they're caught out in the open. These two moves should raise the skill ceiling a little. 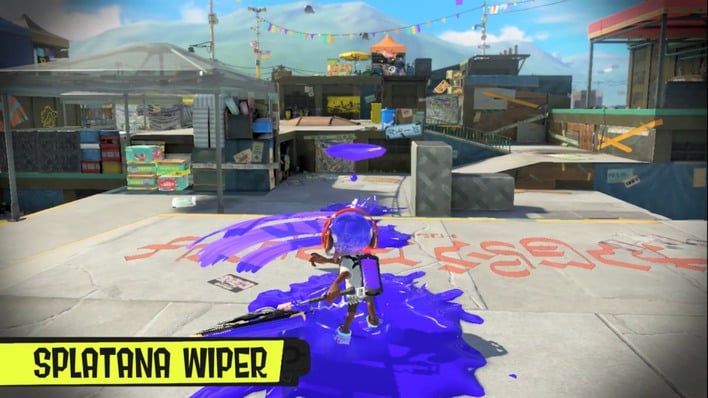 There will be two new primary weapons and at least three new special weapons in Splatoon 3. The primary weapons include the "Splatana Wiper", which appears to be a car wiper blade repurposed as a weapon, and "Stringers," which are a curious hybrid of shortbow and fishing reel. 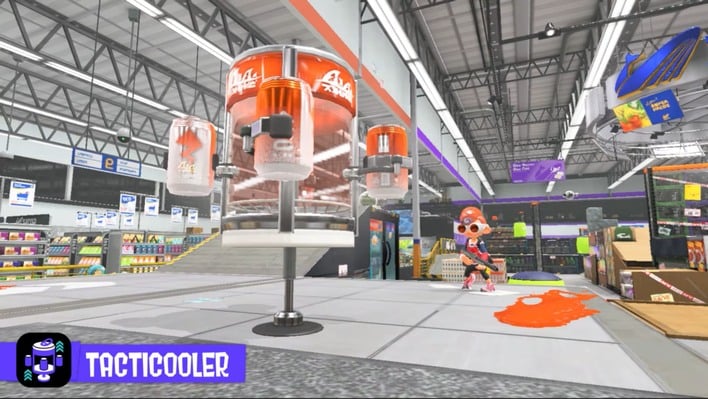 The new special weapons include the mobile and explosive Reefslider, the area-denial Wavebreaker weapon, and a curious support item called the Tacticooler that lets you deploy drinks to give your teammates temporary power-ups. Additionally, the special weapons from the previous two games return, including the beloved Booyah Bomb.


The actual acquisition of weapons is a bit different in Splatoon 3. Rather than spending the obviously named in-game currency "Cash", you'll instead have to acquire and exchange Sheldon Licenses to upgrade to new shooters and splashers. These seem to be acquired by continuing to use the same weapon for a time, so they may be intended to represent mastery with said weapons. 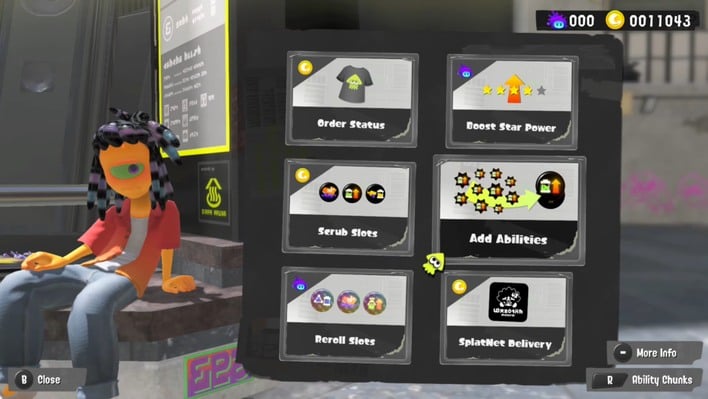 Some players have already expressed disappointment at the lack of new game modes in Splatoon 3, but there are a ton of game features on the way outside of battles. Obviously, character customization makes a comeback, and players can customize their gear even more carefully with the help of a new NPC named Murch. There's also a new function to let you save your "Fits", or loadouts, and quickly re-load them later. 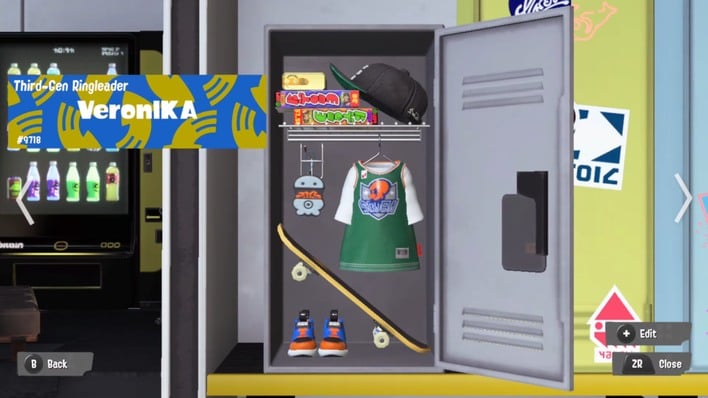 The Locker feature was a real surprise. It allows players to customize a locker with cosmetic items. It looks to be entirely up to taste, as there doesn't appear to be any mechanical point to the feature, but players will be able to browse the lockers of other players they've recently played with. It's a cool, micro-sized version of the player housing features you can find in other games. 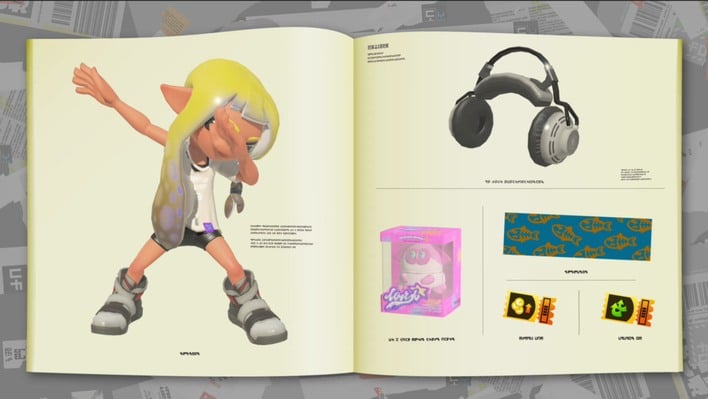 Nintendo didn't explain much about it, but another new addition coming to Splatoon 3 is the Catalog feature. On the face of it, this appears to be similar to a "battle pass" as found in other games, where players have a limited amount of time to earn cosmetic items and other rewards by achieving certain goals in-game. Nintendo says that there will be a new catalog every three months for at least two years after release, and that there will be new weapons added to the game with each catalog. 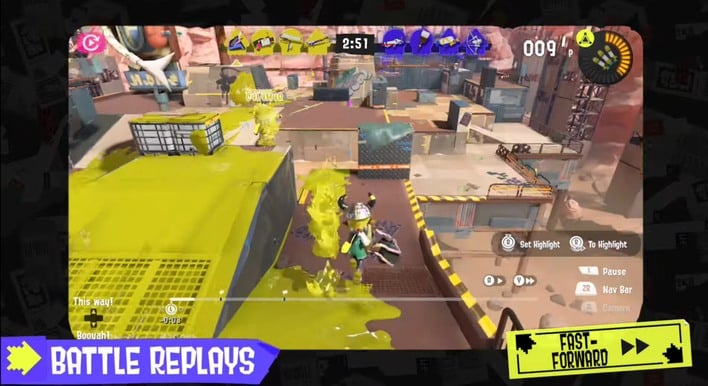 One of the more exciting extras for competitive players is the new Battle Replay feature. This has all of the functions you'd expect from a replay feature, including the option to swap player viewpoints, to rewind and fast-forward, and even to share replays with other players. Competitive players will also probably be excited to hear that Nintendo plans to add "X Battle" and "League Battle" modes for high-ranked players after launch. 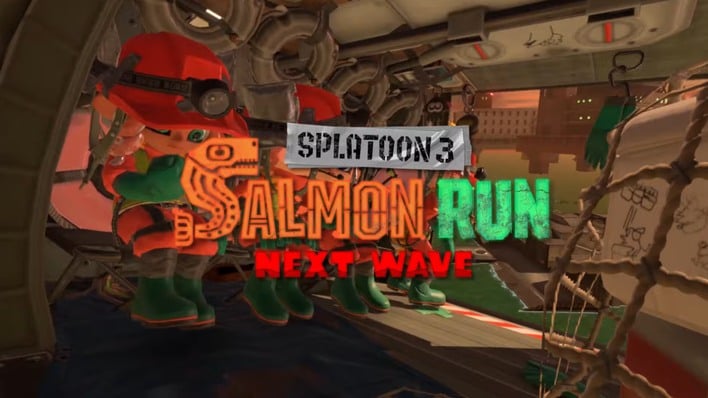 On the other hand, those who prefer cooperative gameplay can rest assured that the four-player co-op Salmon Run mode is returning, and there's a whole pile of new bosses to battle as well as a new class of enemy called King Salmonids. Nintendo also teased a mode called Big Run in which the Salmonids invade the city; it'll apparently only be available temporarily every few months. 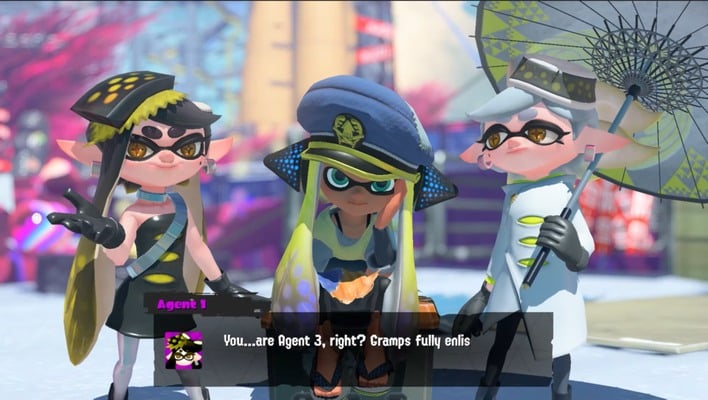 Solo players aren't left in the lurch, either. While Splatoon's short solo campaigns have always been more about teaching the player mechanics than offering a compelling solo play experience, Splatoon 3's story mode looks like it might be a little meatier. Titled "Return of the Mammalians," it seems to include numerous cutscenes and callbacks to previous games. 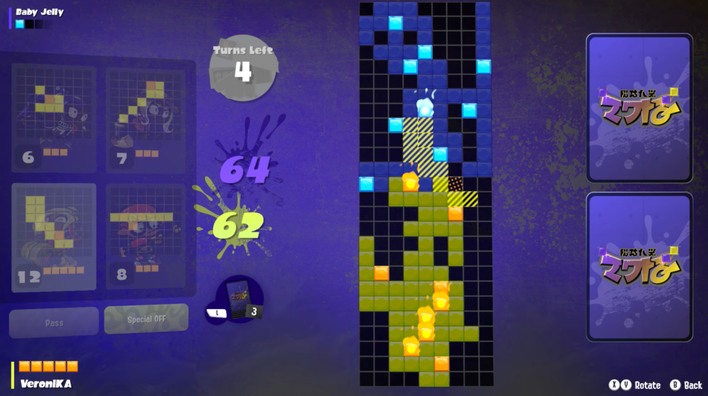 Another big surprise from the Splatoon 3 Direct was the revelation of the Table Turf Battle collectible card game. This appears to be a separate game mode inside Splatoon 3 that has players use decks of collectible cards to do battle against other players in a table-top version of the standard Turf War game mode. Each card has a pattern that it 'captures', and the goal is to capture more area than your opponent. 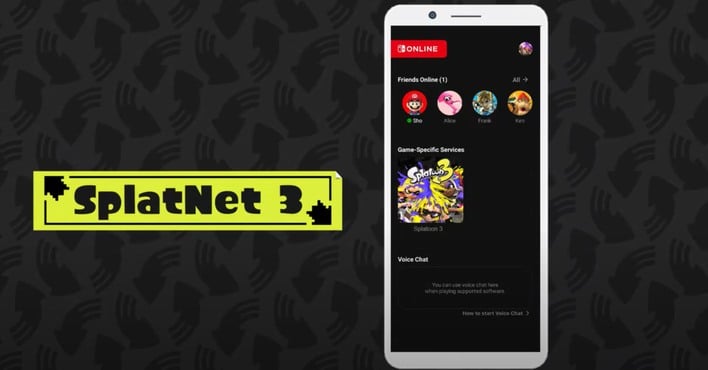 There also will apparently be a smartphone application that ties into Splatoon 3 called Splatnet 3. It'll be part of Nintendo's existing mobile app, and players will be able to log in to their accounts and enjoy additional Splatoon 3-related content, as well as check records and acquire mobile-exclusive items. 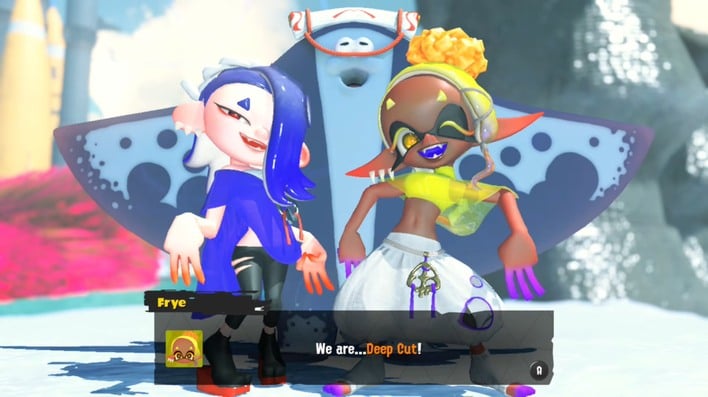 Of course, it wouldn't be a new Splatoon game without new seafood-themed idols, and indeed, the musical group for Splatoon 3 is a trio called Deep Cut. Consisting of the cool Sizzle, the spunky Frye, and the very wide Big Man, Deep Cut exists in the game world as a means to deliver update information to players. 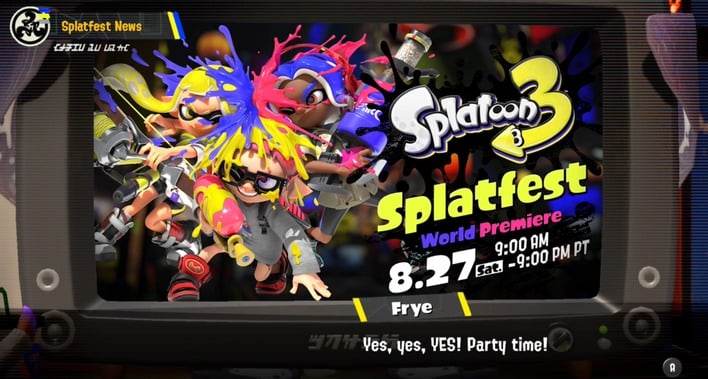 Arguably the most important function of each game's musical act is to serve as the setup for the game's "Splatfest" competitions. Like with Splatoon 2, Nintendo will be holding the first Splatfest before the game even launches. Starting August 18th, players will be able to download a beta client for the game from the Nintendo eShop to participate in the first Splatfest, which will be a three-way battle pitting Rock, Paper, and Scissors against each other. The demo will be partially playable on the 25th, but the Splatfest doesn't start until the 27th. 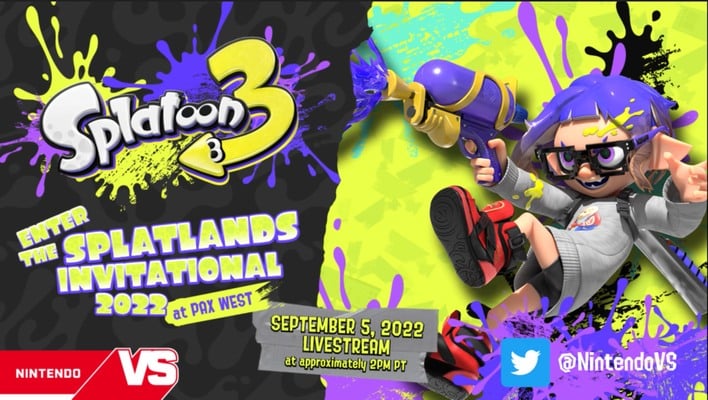 Nintendo is also holding an Invitational Tournament at PAX West on September 5th. The top players from the Splatoon 2 Inkopolis Showdown 2022 tournament have all been invited to the convention in Seattle to compete in the first Splatoon 3 invitational to be held outside of Japan.