A start-up company founded in 2014 recently launched a prototype projectile tens of thousands of feet into the air using kinetic energy. This is far different than what we are accustomed to seeing as rockets carrying cargo and astronauts are typically sent into outer space using a ton of rocket fuel.

SpinLaunch was founded in 2014 by its CEO Jonathon Yaney. The test launch was kept low key and below the media's radar on Oct. 22, 2021 at Spaceport America in New Mexico. The launch was a massive milestone in the company's journey toward creating an alternative to rocket fuel based launches currently used. Launches such as Lucy launched recently and DART later this month by NASA.


The Suborbital Accelerator that is used to spin the projectile is designed to operate at ranges of 800 to 5,000 mph and is a test-bed for the Orbital Launch System. It offers customers with testing capabilities that provide long term value as a satellite qualification facility. It is composed of several components which includes an adjustable launch cradle to support the weight of the chamber.
A vacuum plant manifold is also included, which is responsible for removing air from the chamber to create a low friction environment. But the largest component is a 1000 ton steel vacuum chamber that maintains the low pressure needed for sustained high speed operation. The component the projectile exits is a sonic flow reduction cavity. It has internal baffles that dampen the airflow entering the chamber as the projectile moves into the atmosphere. The suborbital accelerometer is only one-third the size it intends to build later, but it still stands about 165 ft. tall. 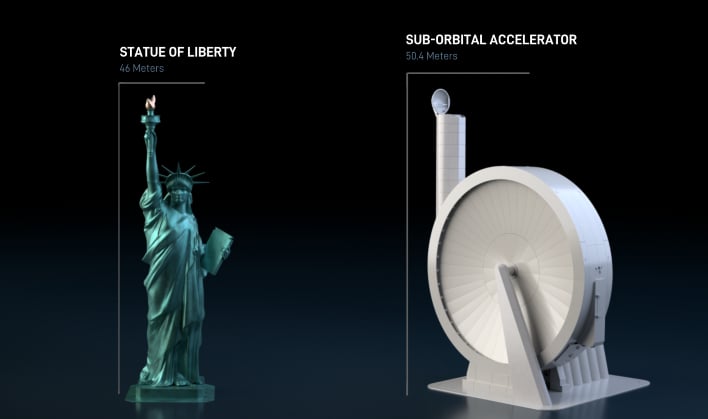 The rotating arm that is held by the vacuum chamber accelerates the projectile to a high speed and then releases it in less than a millisecond. SpinLaunche's initial test flight only used about 20% of the accelerator's full capacity for a launch. That launch was capable of flinging a projectile tens of thousands of feet into the air. It is not a stretch to believe the company will be able to eventually increase the power and manage to place an object into low orbit. The rocket, or projectile, will be able to be recovered as well, reducing costs over time. All of this has caught the attention of companies interested in launching satellites, including the US government.


Yaney told CNBC, "It's a radically different way to accelerate projectiles and launch vehicles to hypersonic speeds using a ground based system. This is about building a company and a space launch system that is going to enter into the commercial markets with a very high cadence and launch at the lowest cost in the industry."
SpinLaunch is aiming to provide a payload capacity of 200 kilograms. That has the potential to carry a few small satellites at one time. By not using rocket fuel, which is most of the weight of a rocket at launch, SpinLaunch provides a much more cost effective way to place objects into orbit. The company is aiming to have another 30 or so suborbital test flights over the next six to eight months.

This is most certainly exciting and interesting news for those interested in and associated with placing satellites, and perhaps other objects, into orbit (watch out, trolls). Yaney himself described it as being "audacious and crazy". There is a number of ways companies and the US government can utilize this new technology. We look forward to watching this company as it moves forward in its development and testing.