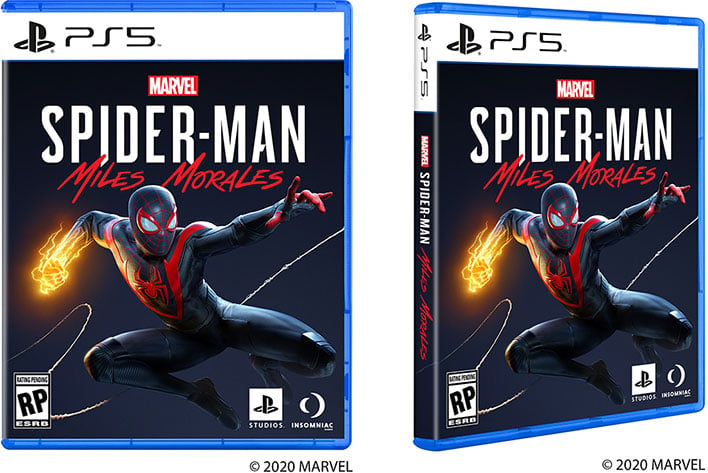 We still have no official word on how much the PlayStation 5 will cost when it debuts later this year, or exactly when it will launch, or what the actual performance will be like in comparison to the Xbox Series X, or...well, let's focus on something we DO know. That would be what the box art for Spider-Man Miles Morales looks like.
"A quick update for our fans—here’s your first look at the box art for PS5 games you’ll be seeing on store shelves this holiday, starring Marvel Super Hero Miles Morales," Sony stated in a blog post.
Spider-Man Miles Morales is being developed by Insomniac Games and published by Sony Interactive Entertainment. It will be exclusive to the PS5 (maybe—more on that in a moment), just as Marvel's Spider-Man in 2018 by the same developer and publisher was exclusive to the PlayStation 4. Incidentally, the first title in the series also led to a limited edition themed PS4 Pro 1TB console, which we snagged and put under the camera.


Who knows if Sony will also trick out a PS5 with a Spider-Man Miles Morales theme in limited edition form. It wouldn't be a bad idea—we could see the themed console sparking sales, perhaps even swaying some buyers who might be planning to pick up an Xbox Series X.
As for the box art, it is overall similar  to the first game in the series, though not identical. Interestingly, eagle-eyed viewers have pointed out that unlike every other exclusive title, the box art does not say "Only On Playstation" on the top. Perhaps it will have that stamped on the cover when it ships, or maybe it will end up on other systems as well, like the Nintendo Switch and PC. Probably not, but hey, Sony left the door open.
Spider-Man Miles Morales is a standalone game with a new story, new villains, and new powers. It will be available as a launch day title when the PS5 comes out.