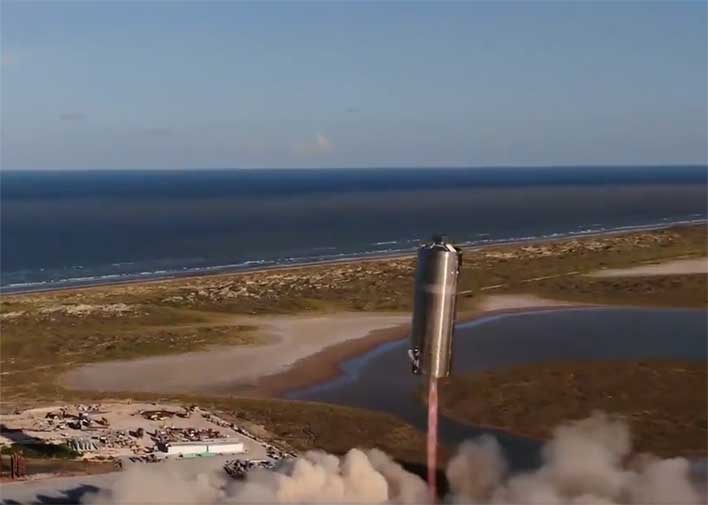 SpaceX hit another milestone this week with an early prototype of its Starship rocket taking flight for the first time. The company posted a short clip to YouTube that shows the unfinished rocket light its Raptor engine and take to the sky. Eventually, later versions of the spacecraft will use multiple Raptor engines, but a single engine was all that was necessary for this test flight.

The video shows ignition with smoke, flame, and dust billowing around the rocket and obscuring it shortly before the top of the shiny metal rocket emerged from the cloud and lifted upward. The rocket attained an altitude of roughly 150 meters before firing a thruster out of its right side to move it towards a landing pad for its equally short trip back to Earth.

At different points in the video, a shot from inside the rocket looking down on the Raptor engine is seen. At one point, a small flame appears to be shooting out of the Raptor engine's side. It's unclear if that's simply part of the engine's construction or if there was some sort of malfunction. We assume it's normal as SpaceX does not mention it, and the ship landed safely.

The small landing feet drop down at the appropriate time and the rocket neatly balances back on the ground with the short test mission completed. During this test flight, a critical task was to determine if the stainless-steel structure of Starship could survive launch and landing. It appears that was a success, even if this test launch didn't use the complete ship.

Elon Musk stated in June that the Starship rocket is SpaceX's top priority, and the team is working hard on the spacecraft. The biggest news from SpaceX since the company was founded was the completion of its successful Crew Dragon mission giving America the capability of putting astronauts back into space for the first time since the Space Shuttle fleet retired.