You can take some amazing photos with a smartphone these days, even nighttime shots of the stars and dimly lit environments, depending on the specific model you own (see our Pixel 6 Pro review for an example of this). Nevertheless, professional photographers by and large still turn to Digital SLR (DSLR) and mirrorless cameras. Would that still be the case if smartphones surpassed both in image quality? We're going to find out, if Sony's prediction comes true.
It's an interesting subject, given that smartphones have, for the most part, replaced dedicated point and shoot cameras. They still exist, but the convenience of whipping out a smartphone and the image capabilities of today's handsets have made point and shoot cameras far less useful than they had been in the past.
Well, according to Sony Semiconductors Solution president and CEO Terushi Shimizu, the image quality advantage that DSLRs hold over smartphone cameras is nearing an end.
"We expect that still images will exceed the image quality of single-lens reflex cameras within the next few years," Shimizu said during a recent briefing session, according to Nikkei.
During the media session, he noted that in 2019 it was said there were three elements on smartphones that would continue to evolve, those being the battery, display, and camera. From his vantage point, battery and display technologies have essentially peaked, but "there are still expectations for the camera to evolve." 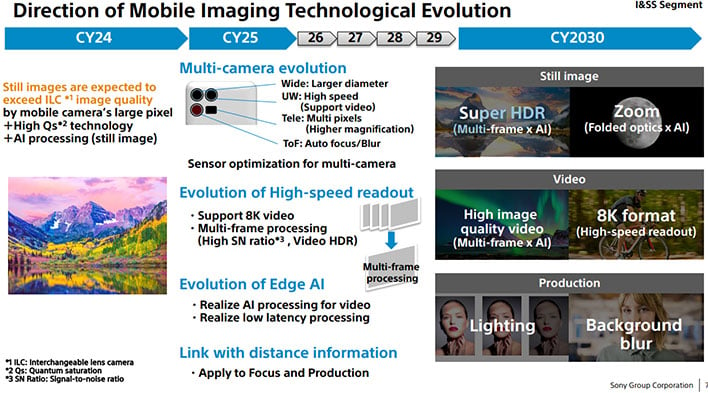 This wasn't a case of Shimizu speaking off the cuff and making statements that Sony would later feel the need to clarify. Similar claims can be found in a recent slide deck presentation for the same event. In the one above, Sony claims "still images are expected to exceed interchangeable lens camera image quality" by 2024.
So in other words, it's Sony's position that continued advancements in smartphone photography will lead to superior image quality compared to both DSLRs and mirrorless cameras within the next couple of years. Part of this will come down to the physical hardware, especially with today's phones utilizing multiple camera sensors. But AI-driven software processing will also continue to improve and give smartphone photography a boost.
To Sony's point. we've witnessed what has felt like rapid advancements in smartphone photography over the past few years—just check out our OnePlus 10 Pro review or Oppo Fine X5 Pro hands-on to see some impressive photography capabilities. There's also work underway to develop phone cameras that can capture the world in 3D.
All that said, despite Sony's prediction we don't see DSLR and mirrorless cameras going away in the next couple of years, especially the higher end models that command thousands of dollars. But we'll certainly welcome continued improvements in our smartphone cameras.