You may have figured Sony would blitz CES with new headphones and other audio products, and perhaps a wide assortment of electronic gadgets. Instead, the company is sparking interest with the Vision-S, a concept electric vehicle (EV) with nearly three dozen sensors in and around the car, and a bunch of high-tech goodies.
Sony is not the first name that comes into mind when thinking about automobiles, and the EV category specifically. However, the Vision-S is a bold (and surprising) attempt to inject Sony into the discussion, and in a big way. If nothing else, this is certainly an ambitious move by the PlayStation maker.
"Sony wants to change mobility as we know it. How can we inspire people through mobility? What kind of richness can we bring about? Sony will use creativity and technology to open up a new world of mobility," Sony says. "Sony is alive within society and on Earth. New human activity exists beyond new mobility. Sony will work directly toward that ideal."

Sony says it wants to "re-imagine mobility as we know it," and it is not talking about smartphones. At the same time, this is brand new territory for Sony, which admits is "working to thoroughly understand the mechanism of cars." Making quick work of the task, the Vision-S is a concept EV built to feel "extremely secure" and safe, with various creature comforts adding to the package. 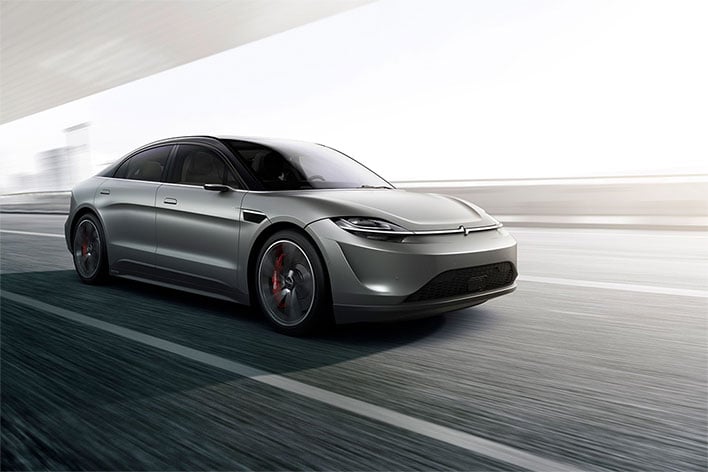 It also features a "newly-designed EV platform" that Sony says can be adapted to SUVs and MPVs, in addition to coupes and sedans. There are 33 sensors total inside and outside the Vision-S, along with a next-generation software architecture to constantly monitor things, in conjunction with 5G network connectivity and continued improvements through over-the-air (OTA) updates.
The Vision-S is a four-seater weighing 5,180 pounds. Sony is mum about the drivetrain—it's assumed to be powered by a pair of electric motors—but says it can go from 0-62 miles per hour (MPH) in 4.8 seconds, with a top speed of 149 MPH. It's also an all-wheel drive vehicle with a double wishbone front and rear suspension air spring system. 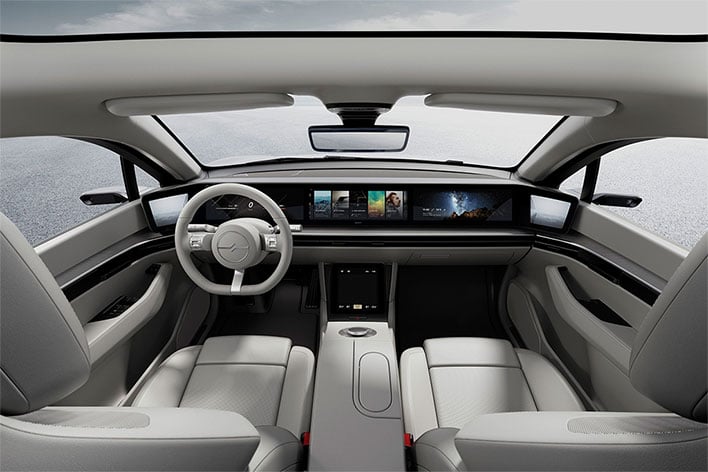 For the interior, Sony envisions a cabin that echoes a living room. Part of that entails a "360 Reality Audio" system utilizing object-based spatial audio technology and individual seat speakers, and a panoramic screen featuring a row of displays to create a wide screen that runs the length of the dash, and slightly beyond.

"Going from place to place every day will become a time for people to indulge in the luxury of enjoying movies and other video. The ergonomic user interface will be extremely intuitive, with each driver and passenger able to freely access content. A jog dial will also be installed, allowing fingertip video control, even if the viewer has chosen to recline their seats," Sony says.
It will be interesting to see what comes of this. As of right now, Sony has not indicated if the Vision-S will morph from a concept EV into a production automobile, or if its platform will perhaps find its way into other cars.