Sony's Revised PlayStation 5 Design Is Lighter But At What Cost To Performance?

Sony has been quietly revising its latest generation game consoles, starting with the PlayStation 5 Digital Edition and followed by the PlayStation 5 with a built-in Blu-ray drive. Both revisions have started to find their way to retail shelves in certain territories. The main difference at a glance is the weight. The newer models are lighter than the original versions, and a recent teardown reveals why—the cooling scheme is altered.
The other change is less controversial, in that Sony also swapped out the screws on the base. On the original PS5 consoles, users needed to bust out a flat head screwdriver to remove the screws and get at the guts to perform whatever surgery might be required or desired (like upgrading the SSD). On the newer revisions, the consoles use thumb screws.
Swapping out the screws doesn't have any meaningful impact on weight, though. In a YouTube video, Austin Evans takes apart a revised PS5 without a Blu-ray drive and compares the internals to the original model. He ultimately concludes, "The new PS5 is worse." But is it really?
Let's talk about the weight reduction first. Near the beginning of the video, Evans weighs both consoles, finding that the original model tips the scales at 3,828 grams, or 8.4 pounds, while the revised PS5 sees a reduction to 3,541 grams, or 7.8 pounds. So the newer model is more than half a pound lighter.
He also compares the noise output and power consumption. The noise meter registered 43.5 decibels for the original model and 42.1 decibels for the revised PS5, whereas the wattage reading between the old and new registered 225W and 230W, respectively. Those wattage readings could be explained away to the margin of error and/or just general differences in the silicon lottery, taking into consideration that the CPU and GPU have variable clock speeds.

Comparing Fans, Heatsinks, And Temps On The Original And Revised PlayStation 5 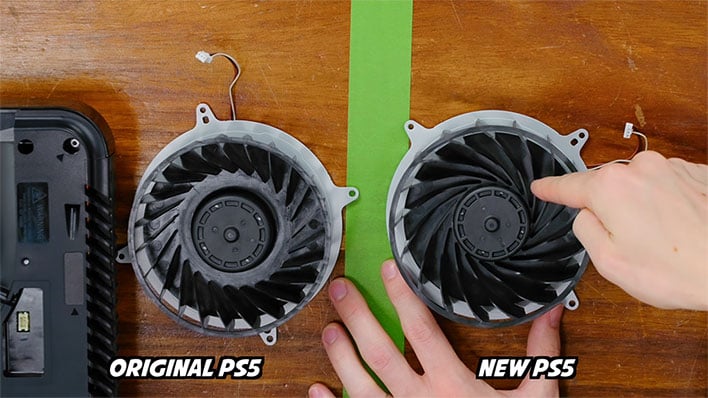 Where things get interesting is when comparing the cooling scheme of the old and new console. It was observed that the fan blades on the revised PS5 are "much more curved" than the fan in the original console. The blades are longer, too, extending all the way into the center section. As for the weight, both fans registered 257 grams on the scale.

So where exactly does the weight reduction come into play? As it turns out, the revised PS5 is using a much smaller heatsink assembly. 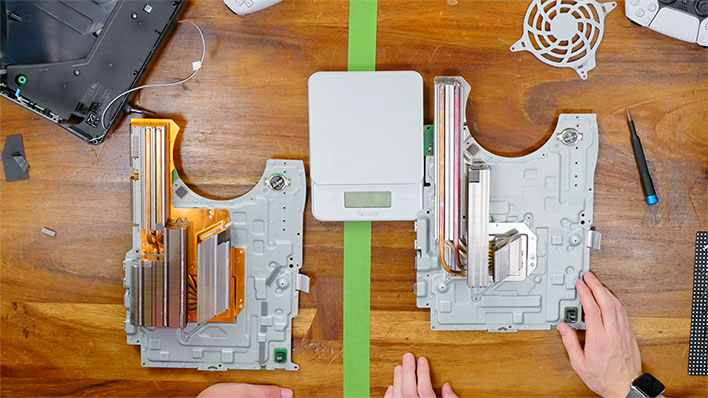 It makes sense that if the heatsink is smaller, cooling performance will take a hit. However, it's important to note that Evans essentially measured the temps of the exhaust air, rather than internal temps or how hot the actual silicon runs. It is entirely possible that the revised heatsink does the job does fine, and we'd like to think Sony's engineers came to that exact conclusion—the last thing Sony wants to do, after all, is process a bunch of RMAs due to overheating consoles.
Still, it's interesting that the weight reduction is solely the result of a much smaller heatsink. In general, larger heatsinks dissipate more heat when all other things are equal, because there is more surface area to send those thermals.
It's also pointed out in the video that if upgrading the PS5 with a fast SSD, higher temps (if they exist internally) could potentially negatively affect the drive.
Toward the end of the video, Evans remarks, "I don't think there's any argument this is a worse console, at least for thermals and for the cooling...[and] as far as I'm concerned, I'd rather have a launch PS5." It will be interesting to see if others end up feeling the same way, or if this turns out to be much ado about very little.
Images Source: Austin Evans/YouTube