Historically, Sony has been loathe to fully embrace cross-platform multiplayer gaming, much the consternation of gamers. Who knows when or if it will pull a true 180 (to Sony's credit, it does support cross-play in some instances). When it comes to its PS4 Remote Play feature, however, a new survey hints that Sony might be more welcoming of competing consoles.
PS4 Remote Play is a different beast than cross-play, of course, but it was to be supported by competing consoles, it would be an interesting twist (and a welcome one). As it stands, PS4 Remote Play allows gamers to stream PlayStation 4 games to their Windows PC, Mac system, Apple iOS (12.1 or higher) devices, and Google Android (5.0 or higher) tablets and phones.
"Play your favorite games on PS4 and PS4 Pro, pause the action and switch to another device on your broadband network, without being tied to the TV," Sony pitches.
Good stuff, and it might get even better. A user on Reddit posted some questions from a Sony survey they recently participated in. One of the questions asked how appealing the participant would find being able to use PS4 Remote Play on a device without an internet connection. So that is one feature Sony seems to be exploring. 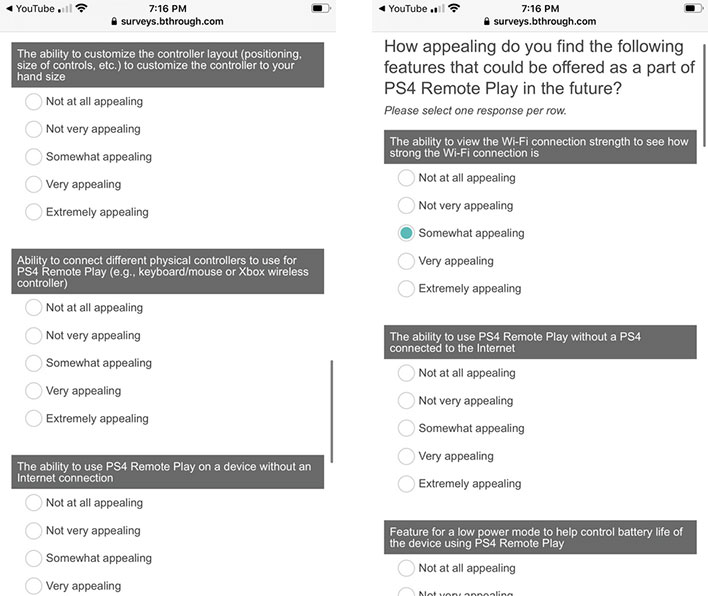 More interesting, however, is a question gauging the participant's interest level using PS4 Remote Play "on more devices (e.g., able to play on Nintendo Switch, Apple TV, or Android TV)."
Sony specifically mentions the Switch, which recently notched more lifetime unit sales than the legendary Super Nintendo Entertainment System (SNES). Clearly this is something Sony is at least thinking about. And while not specifically highlighted in the survey, if Sony is considering opening up PS4 Remote Play to other devices, there is a chance (however slim) that the Xbox One could be among those devices.
Circling back to Sony's reluctance to fully embrace cross-play, presumably because the PS4 competes aggressively with the Xbox One, I would be surprised if PS4 Remote Play found its way to that console. But never say never, right? At the very least, the Switch is in contention to some extent.