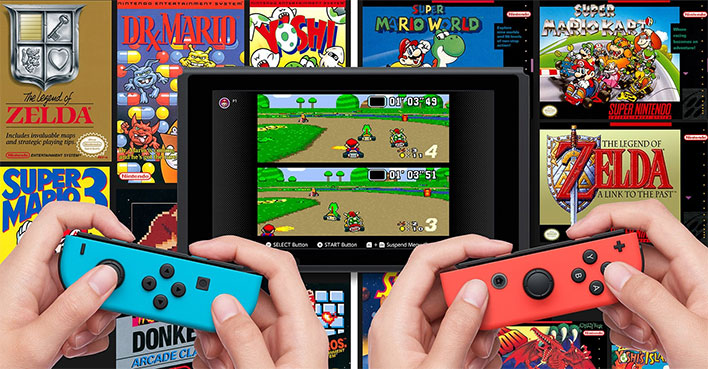 Nintendo may have take a swing and a miss with the Wii U, which failed to recapture the magic of the Wii and ranks as the company's worst selling console of all time, but the same is not true of the Switch. It continues to sell like gangbusters—Nintendo sold an additional 10.81 million Switch systems during the last quarter, and 52.48 million since launching nearly three years ago.
The Switch will need to double that figure in order to surpass the original Wii at 101.63 million lifetime sales, but the hybrid console is well on its way. Just as impressive, the Switch managed to scoot past the venerable Super Nintendo Entertainment System (SNES) in lifetime sales—Nintendo pegs SNES sales at 49.1 million units over its lifetime.
Next in line is the original NES, which notched 61.91 million lifetime sales. The Switch is on track to surpass that total at the end of this quarter, and if not, certainly by the end of the year. Same goes for the 3DS—it sits at 75.71 million sales, and will likely be overtaken by the Switch before the year comes to a close.
Since launching the original Switch, Nintendo has come out with a revised model that offers longer battery life, and a Switch Lite that trades detachable Joy-Con controllers and the ability to dock for use on a television for a smaller, lighter, more portable profile.
"During the nine months ended December 31, 2019, Nintendo Switch Lite launched in September as a compact, lightweight, and easy-to-carry system dedicated to handheld gameplay, and Nintendo Switch performed well without losing momentum, resulting in significant sales growth for the entire Nintendo Switch family that surpassed the same period in the last fiscal year," Nintendo said in its latest quarterly earnings report.
Related software sales also performed well. From April to December 2019, Nintendo sold 16.06 million copies Pokemon Sword and Pokemon Shield combined, while Super Mario Maker 2 and Luigi's Mansion 3 each added over 5 million unit sales to the tally.
In terms of lifetime sales, here are the top 10 best selling Switch games to date...
Now that the holiday shopping season is in the rear view mirror, sales will inevitably slow a bit. However, I do not anticipate a monumental decline, considering how successful the Switch has been in the past three years.