The latest generation game consoles from Microsoft and Sony lean heavily on PC hardware, and that includes the core components—both sport a custom system-on-chip by AMD comprised of Zen 2 CPU cores paired with RDNA 2 GPU cores, to enable ray-traced visuals and gameplay at up to 4K. There are some key differences, though, between the custom chips and their PC brethren. Some of those differences are visible in a set of detailed die shots of the PlayStation 5's SoC.

Let's talk about the core specifications before getting to the die shots. The PS5 is an impressive console kit featuring an 8-core Zen 2 CPU sporting a variable clock speed up to 3.5GHz. On the graphics side, 36 compute units based on RDNA 2 also run at a variable clock speed, up to 2.23GHz. Rounding out the spec sheet is 16GB of GDDR6 memory on a 256-bit bus, and a custom 825GB PCIe 4.0 solid state drive serving up 8-9GB/s of compressed throughput (5.5GB/s raw). 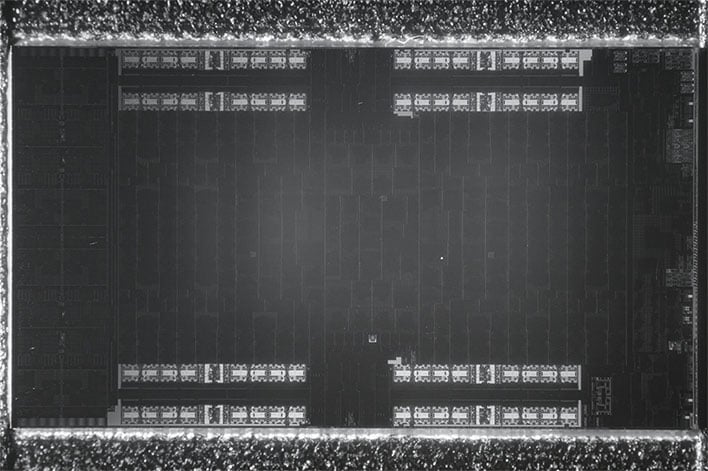 Now, back to the photos. Prominent chip photographer Fritzchens Fritz snapped some closeup shots of the SoC, along with a set of infrared images, and served them up to the public domain. They're absolutely gorgeous, provided you have an appreciation for this sort of thing (and even if you don't, Fritz's photo taking skills are undeniable here).

"A first quick and dirty die-shot of the PS5 APU (better SWIR image will follow). It looks like some Zen 2 FPU parts are missing," Fritz notes on Twitter, regarding the infrared shots agove. 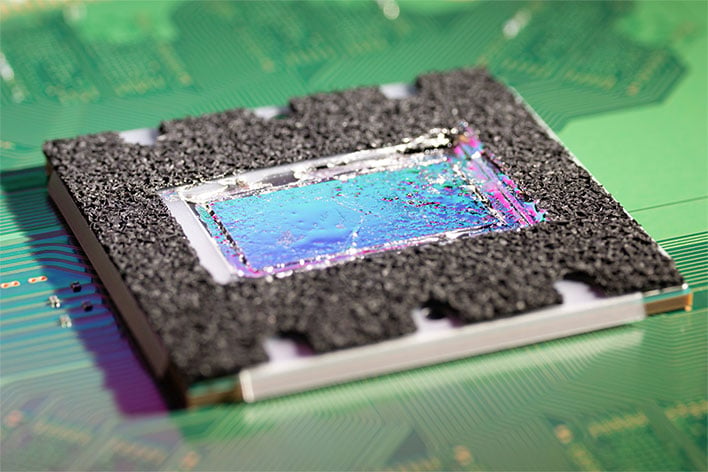 Fritz also served up a collection of color photos showing the liquid metal Sony employed to keep temps in check. Liquid metal is sometimes used by enthusiasts in place of traditional thermal paste. It serves the same purpose, filling in microscopic gaps to enable better contact and conductivity between the chip's integrated heatspreader and the heatsink that sits on top. However, liquid metal typically performs better than paste, resulting in lower temps. It's just trickier to apply.

Sony's Yasuhiro Ootori talked a little about this last year in a teardown video exposing the PS5's large cooling fan and other bits.
"The PS5’s SoC is a small die running at a very high clock rate. This led to a very high thermal density in the silicon die, which required us to significantly increase the performance of the thermal conductor, also known as the TIM, that sits between the SoC and the heatsink. The PS5 utilizes liquid metal as the TIM to ensure long-term, stable, high cooling performance," Ootori said.
Cooling aside, what about those differences between the PS5's SoC and Zen 2 in PC form? Twitter user Locuza concocted a floor plan based on the die shots.

My interpretation of the floor plan PS5 floor plan:
1. Bomba surprise that Sony likely cut down the 256-Bit FP pipes to just 128-Bit.
2. No Infinity Cache/L3$, also not on the Xbox Series.
3. Might have the old Render Backend design, need higher res to say for sure.
4. ... https://t.co/gwrXI903U8 pic.twitter.com/Vvmm1hGSM8

One thing that is immediately clear is the lack of Infinity Cache on the PS5's SoC. This is in contrast to the Radeon RX 6000 series for PC, which employ 128MB of Infinity Cache to deliver up to a 3.25x bump in bandwidth, for added performance in some situations. This is absent on the PS5, however, and the same apparently goes for the Xbox Series X/S.
It also appears AMD ripped out the Fixed Function Units (FFUs) and Fused Multiply-Add (FMA;FMADD) bits, and may have reduced the FP pipes from 256-bit to 128-bit. To be sure, though, a higher resolution closeup is needed.

In any event, as we have known all along the SoCs found inside the latest generation game consoles are markedly different than the newest CPU and GPU hardware for PC, despite being based on the same underlying architectures.