Both the PlayStation 5 and Xbox Series X/S are big consoles, compared to previous generation models. Part of the reason is assumed to be that these are basically fast PCs in console digs, with custom hardware based on AMD's Zen 2 CPU and RDNA 2 graphics architectures. And that is true. But regarding the PS5 specifically, Sony's Otori Yasuhiro explained exactly why the console is as big as it is, and what it would have taken to make it smaller.
There are two versions of the PS5—one with a bulge at the bottom to accommodate the built-in optical disc drive, and one without the bulge/ODD. The bigger model measures about 390mm (H) by 260mm (D) by 104mm (W), or 15.4 by 10.24 x 4.09 inches, while the disc-less model is about 12mm (just shy of half an inch) skinnier.
For reference, the PS4 Pro measures 327mm by 295mm by 55mm. The PS5 is much bigger overall, and it owes the added size to the double-sided cooling fan that was shown off in a recent (and official) teardown video. Check this thing out... 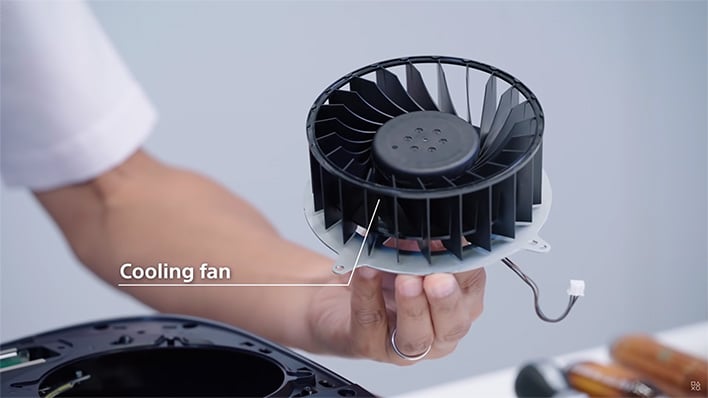 Yasuhiro leads the team in charge of the PS5's mechanical and thermal design. He spoke with Nikkei's Cross Tech (XTech) publication about the impact the fan had on the PS5's overall size, saying the fan is 45mm in size, making it thicker than the fan inside the PS4 and PS4 Pro. The alternative would have been to go with a dual-fan design.
"There was a way to make the PS5 smaller than it is now. For example, if you prepare two cooling fans, one for side A and one for side B, you can reduce the size. However, the cost increases because the number of cooling fans increases to two," Yasuhiro explains, translated by Google.
I'm not sure how much added cost two smaller fans would really have compared to a single bigger one, but I suppose it was enough for Sony to opt for the larger option. To be fair, every penny counts when you are talking about millions of units.
Cost was not the only issue, though. Yasuhiro also said controlling the rotation of two fans would have been more difficult than just one. And while not outright stated, it would introduce another point of potential failure.
Larger fans also have the benefit of being quieter than smaller fans, at least potentially. They do not have to spin as fast or work as hard to push around the same amount of air, compared to smaller fans. You can see this in the PC space when comparing a 140mm fan (or bigger) to a 120mm fan (or smaller).
So there you have it—the PS5 is Sony's most powerful console to date, which in turn requires a beefy cooling fan, making it also the company's biggest console ever.