PlayStation 3 games have been seen in the PlayStation 5 store, and they have some wondering if their presence is a hint at things to come. People were taking to social media and saying they hoped it meant that Sony would soon be making PS3 games backwards compatible with the PS5 console.


PlayStation fans may not have been excited about the release of the one time Sony exclusive God of War on PC, but Sony seems to be working hard to make its console owners happier with its latest gen console. PlayStation 5 owners may finally be getting a key feature it has been missing with a Spring update that includes Variable Refresh Rate (VRR).
Sony has also said it will begin producing PlayStation 4 consoles, in order to try and combat the shortage. Now, PS5 owners have been saying that they have spotted PS3 games with pricing in the store, and it has left them wondering if Sony is going to be adding backwards compatibility for them.

One person on Twitter posted, "Uhhh. Not to panic anyone, but a PS3 game shouldn't have a price when viewed on a PS5. Unless...". Others noticed the odd appearance of PS3 games with pricing and were posting on social media as well. It had everyone asking the question of whether or not Sony would be adding backwards compatibility for PS3 games in the near future. 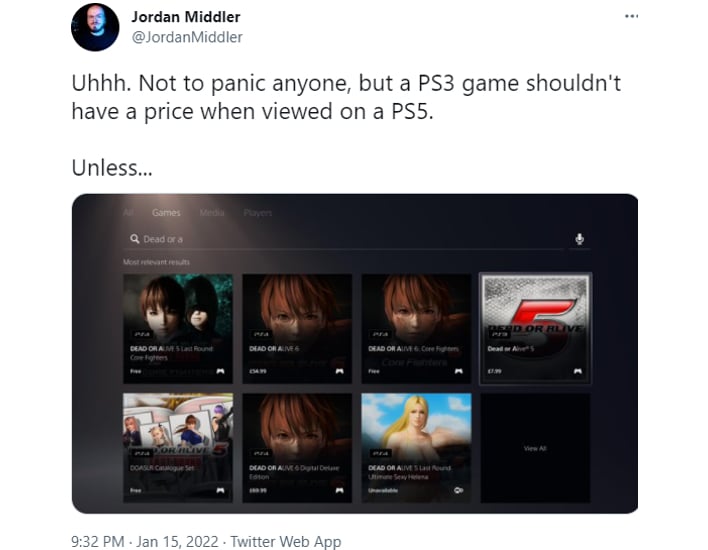 All of this follows a Bloomberg report back in December claiming there was an Xbox Game Pass style option being worked on for the PlayStation. In the article, PlayStation's version is codenamed "Spartacus" and will combine the current PlayStation Plus and PlayStation Now services. The purported combined services will be available across three payment tiers.

Xbox fans have long held the fact they have Xbox Game Pass available as one of the features that makes the console a better option of the two. And with more Sony exclusives moving to other platforms, PlayStation fans are slowly losing their bragging rights. So, it would make sense for Sony to try and come up with something similar to Game Pass to keep its fan base happy. The addition of a Spartacus type option would certainly be a step in the right direction.

Right now a subscription for PS Plus costs $10 a month, and PS Now is an additional $10 per month. This makes Sony's combined offerings $5 more expensive each month compared to Xbox Game Pass Ultimate offered by Microsoft. While there has not been any indication of how much the three tiers will cost with Spartacus, one would think the higher tier will at least be close to the $15 a month cost of Game Pass Ultimate.

Sony's Spartacus' supposed three tiers will include a lower tier that offers the benefits of PS Plus, and the ability to play online multiplayer. The second tier is supposed to allow players to stream (or play locally) via PS Now, and include the benefits of PS Plus. The highest tier is supposed to include all of the prior, and include access to extended demos, plus give players access to classic games from the PS1, PS2, and PS3.

It is important to note that the latest findings of people on Twitter seeing PS3 games with prices in the PS5 store is not a sure sign of what's to come. As many have pointed out, it may simply be a glitch. PlayStation fans will simply have to wait and see what comes of it. But with rumors of Spartacus being floated around recently, it very well may come to fruition.