Sony is starting to show some love for gaming on the PC platform (like remastering the PlayStation exclusive Marvel's Spider-Man for PC) and it's looking for something substantially more meaningful than a one-night stand. To prove it's interested in a long-term relationship. Sony has announced its first hardware products under its new InZone "gaming gear brand for PC gamers."
This could be the start of something beautiful. Or perhaps we're just smitten from the attention Sony is placing beyond its PlayStation ecosystem (kind of--more on that in a moment). Whatever the case, we'll certainly welcome an expanded selection of PC gaming peripherals and hardware from a major manufacturer, which is what this move boils down to.
"The market has been expanding with a higher interest in gaming with the spread of esports tournaments and the advancement of gaming entertainment. With Sony's strong history of high-end audio and visual technology products, we believe this new line will offer even more options for those looking to upgrade their current gaming systems." said Yukihiro Kitajima, Head of Game Business and Marketing Office, Sony Corporation.

Sony is kicking off the PC part with five new products, including two tantalizing monitors and three headsets. All of them look like they were designed for the PlayStation 5 and they're all compatible with Sony's latest generation game console, so in that respect Sony is still playing both sides of the field. That's understandable, though, given that PCs and consoles are more alike than different these days.

The two monitors include the InZone M9 and InZone M3. The higher-end M9 is a 27-inch display with a 4K IPS panel sporting full array local dimming (96 zones). It also features a 144Hz refresh rate, 1ms response time (gray to gray), 95 percent coverage of the DCI-P3 color space, DisplayHDR 600 certification with 600 nits peak brightness, and VRR support (it's a G-Sync Compatible display).
There are two HDMI 2.1 inputs on the M9 to take advantage of fancy features like VRR, which also makes it suitable for connecting the PS5, as well as a DisplayPort 1.4 input and a USB hub.
The InZone M3 is also a 27-inch display, but with a 1080p resolution matched to a speedier 240Hz refresh rate. This one can hit 400 nits and is DisplayHDR 400 certified, while offering 99 percent coverage of the sRGB color space. It also boasts a pair of HDMI 2.1 inputs and an DisplayPort 1.4 connector.
Sony says the InZone M9 and InZone M3 will be available this summer for $899.99 and $529.99, respectively. 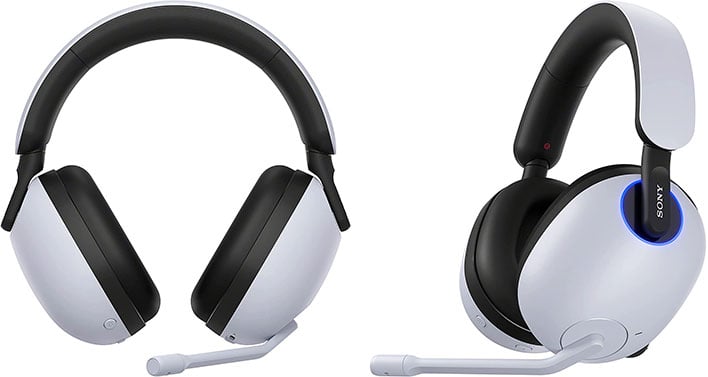 In addition to the InZone M9 and M3 monitors, Sony unveiled  a trio of gaming headsets, including the InZone H9 (shown above), H7, and H3. Both the H9 and H7 are wireless headsets, while the H3 is a wired solution. All three feature 360 Spatial Sound.
The H9 separates itself from the pack by being the sole option with dual sensor noise cancelling technology. It's an over-the-ear headsets packing 40mm Neodymium drivers with a 5Hz-20,000Hz frequency response.
Users will find a volume dial, mic mute button, and a noise cancelling button the left earcup, while the right earcup houses a game/chat balance button, a power button, and a Bluetooth button (if not pairing the headset via 2.4GHz). According to Sony, you can squeeze 32 hours of battery life with noise cancelling turned off, or 20 hours with it turned on.
Here's how the other two compare...

"Developed from Sony's expertise in headphone technology, the diaphragms of the InZone H9 and InZone H7 both have a unique shape that allow the headphones to reproduce extremely high frequency sounds with high compliance, as well as authentic low frequencies for an immersive gaming experience. Ducts on the housing of the InZone H9, InZone H7 and InZone H3 control and optimize low-frequency sound reproduction for powerful bass that makes deep sounds seem incredibly real," Sony says.
They look comfortable, though obviously we can't say for certain if they actually are until we've had a chance to test them out ourselves.
You can preorder the InZone H9 for $298, InZone H7 for $228, and InZone H3 for $98 at Amazon. All three are slightly below their respective MSRPs.