It seems like game studios are always being acquired by bigger outfits, but what's happening now feels like it could be the start of an arms race. Hot on the heels of Microsoft buying Activision Blizzard for a whopping $68.7 billion, Sony followed suit by scooping up Bungie for $3.6 billion. It's a comparatively paltry sum, sure, but Bungie is a major studio and $3.6 billion isn't exactly chump change. Plus, it sounds like Sony is about to embark on a spending spree.
The $3.6 billion Bungie acquisition could be the one that gets the ball rolling. There are still several high profile game studios out there that are not owned (yet) by Microsoft or Sony, but whether it stays that way remains to be seen. That doesn't include Bethesda because, well, Microsoft bought that one up as well (last September) when it purchased ZeniMax.
We're not pulling this speculation out of thin air. During an interview with GamesIndustryBiz, Sony Interactive Entertainment CEO Jim Ryan alluded to more acquisitions being part of the longer term plan.
"We should absolutely expect more," Ryan said. "We are by no means done. With PlayStation, we have a long way to go. I will personally be spending a lot of my time with Pete and the team at Bungie, helping make sure that everything beds down right and that autonomy means autonomy. But elsewhere in the organization, we have many more moves to make."
Ryan also said in the interview that the latest move is not a reactionary one spurred by Microsoft's recent hefty haul, and that conversations had been taking place for months. Additionally, Ryan offered this is not about consolidation in the games market, and instead has "everything to do with a shared vision and how we could do things better together." 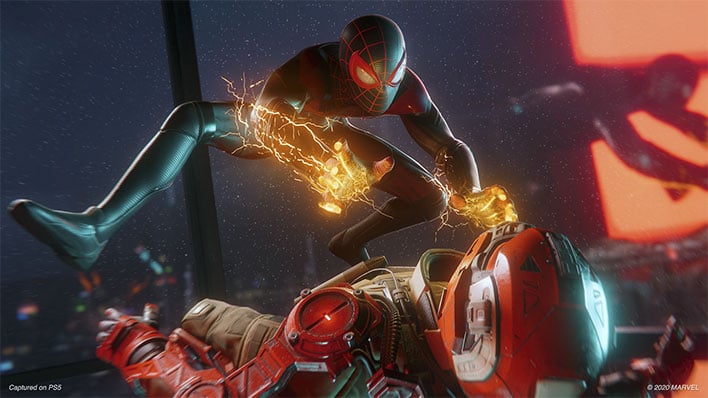 Marvel's Spider-Man: Miles Morales for PS5 (Source: Marvel and Sony)
Sony is already home to numerous game studios, including Insomniac Games (Ratchet & Clank, Marvel's Spider-Man), Naughty Dog (Jak and Daxter, Uncharted), Sucker Punch Productions (Sly Cooper, Ghost of Tsushima), and Valkyrie Entertainment (God of War), to name a few.
Prior to the Bungie announcement and following Microsoft's major move, analysts wondered out loud to The Hollywood Reporter what companies Sony might target. Names that came up included Electronics Arts, Take-Two Interactive, and Ubisoft.
Interestingly, Sony and Bungie have both stated they have no intentions of making the Destiny franchise exclusive to PlayStation, and that they want to continue developing games for multiple platforms. This raises the question of why spend $3.6 billion on Bungie. Clarity will come in time, but looking at the broader picture, Sony acquired valuable IP that could be outside of gaming, including TV shows and movies. We'll see.